BRITISH COLUMBIA – GT Gold has released the results of infill drilling completed on the core zone at the Saddle North discovery […]
By Magda Gardner December 23, 2019 At 1:40 pm 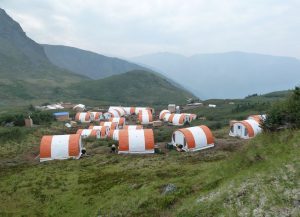 The exploration camp at Tatogga Credit: GT Gold[/caption] BRITISH COLUMBIA – GT Gold has released the results of infill drilling completed on the core zone at the Saddle North discovery within the company’s Tatogga project. Drill highlights include: “Similar to our last release, these results continue to highlight the strength of the Saddle North system, both at depth and near surface,” Paul Harbidge, the company’s CEO said. “Now that this year’s drilling is complete, we continue to make excellent progress with detailed re-logging of core and assimilation of the full range of empirical and geochemical data collected during the field season with the aim of construction of a fully-constrained geological model.” An additional hole extended near-surface mineralization, returning 0.69 g/t gold-equivalent over 209 metres from 62 metres. The core zone at Saddle North has been traced over 200 metres to 400 metres of strike, for 1,200 metres to 1,600 metres down plunge and over thicknesses of 40 metres to 450 metres. This is within the greater Saddle North discovery with dimensions of 700 metres along strike, 1,400 metres to 1,600 metres down plunge and 200 metres to 560 metres across. The geological model is expected to feed into an initial resource estimate for Saddle North, expected in the second quarter of next year. A preliminary economic assessment is expected to follow by year-end. The Saddle North copper-gold porphyry is open at depth with additional targets identified along its strike. The 468 sq. km Tatogga project is located in B.C.’s Golden Triangle district. Saddle North and Saddle South are two recent discoveries on the site. For more information, visit www.GTGoldCorp.ca.