ECUADOR – Lundin Gold has reported that the ramp up of its Fruta del Norte gold mine and plant is on schedule […]
By Magda Gardner January 13, 2020 At 12:59 pm 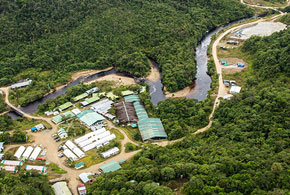 The exploration camp at Lundin’s Fruta del Norte project Credit: Lundin Gold[/caption] ECUADOR – Lundin Gold has reported that the ramp up of its Fruta del Norte gold mine and plant is on schedule and within budget. The mine - Ecuador's first large-scale gold mine - produced 28,678 oz. of gold last year. Based on an update to its mine plan, life-of-mine all-in sustaining costs are now expected at US$621 per oz., up slightly from its prior estimate of US$583 per oz. The increase is primarily driven by revised metal price assumptions leading to increased royalties and production taxes. The company expects to declare commercial production at  Fruta del Norte in the second quarter. Underground development rates are in line with the company’s plan and construction was 99.2% complete at the end of the year. The paste plant is expected to be finished in the second quarter. Of the total gold output last year, 3,411 oz. were produced in doré and 25,267 oz. were produced in concentrate. Of the 3,400 tonnes of concentrate produced, 2,676 tonnes were shipped to a smelter in Finland by the end of the year. The Fruta del Norte underground mine is expected to average production of 300,000 oz. of gold annually over a 15-year mine life with current reserves of 17.8 million tonnes grading 8.74 g/t gold for a total of 5.02 million oz. The company has identified additional exploration targets within the 16-km long Suarez basin. For more information, visit www.LundinGold.com.