NEVADA – Gold Standard Ventures has released the results of an updated pre-feasibility study for the South Railroad portion of its wholly-owned […]
By Magda Gardner February 18, 2020 At 12:50 pm 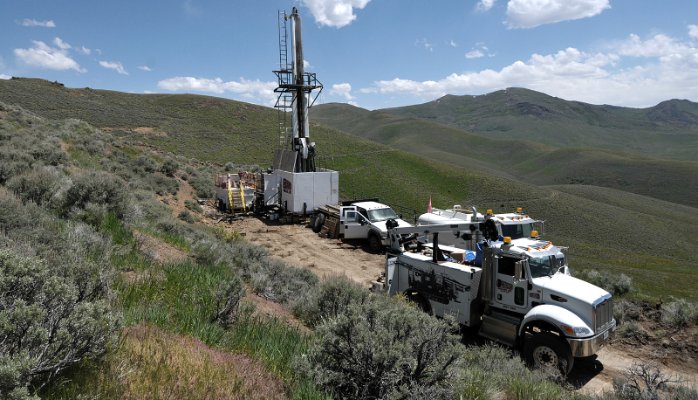 Pinion project Credit: Gold Standard[/caption] NEVADA – Gold Standard Ventures has released the results of an updated pre-feasibility study for the South Railroad portion of its wholly-owned 208-sq.-km Railroad-Pinion project in the Carlin trend. The PFS envisions development of the Dark Star and Pinion deposits at an initial capital cost of US$132.9 million for average annual gold production of 115,250 oz. over an 8-year mine life. All-in sustaining costs at the open-pit, heap-leach operation are projected at US$707 per oz. gold. The associated after-tax net present value estimate, at a 5% discount rate, came in at US$265 million with a 40% after-tax internal rate of return. “We are very pleased to see the substantial improvement in project economics in this second PFS. Project design is an iterative process and we expect to see further improvements as we proceed with our development plans,” Jonathan Awde, the company’s CEO said in a release. “The 2020 drilling program will focus on extending mine life through the potential conversion of inferred resources at Pinion, and other satellite deposits, to the measured and indicated categories, and step-out exploration testing new geologic interpretations at Dark Star.” When compared with the original PFS released for South Railroad in September 2019, the updated study features lower capital costs with a higher internal rate of return. It incorporates a lease-to-own equipment strategy, an optimized mine design as well as increased costs to account for on-site power generation from liquefied natural gas. Gold Standard now plans to submit final permit applications to the Bureau of Land Management with an environmental impact statement for South Railroad. Additional drilling is also planned to upgrade inferred resources at the Dark Star, Pinion and Jasperoid Wash deposits. Follow-up work for South Railroad will include additional geotechnical, hydrological and engineering design studies. Pinion features measured and indicated resources of 28.9 million tonnes grading 0.58 g/t gold and 4.22 g/t silver and inferred resources of 10.8 million tonnes at 0.64 g/t gold and 3.8 g/t silver. Dark Star measured and indicated resources stand at 32.7 million tonnes at 0.88 g/t gold with a further 2.5 million tonnes at 0.7 g/t gold inferred. According to the company, this mineralization is near-surface, mostly oxides and remains open for expansion. For more information, visit www.GoldStandardV.com.