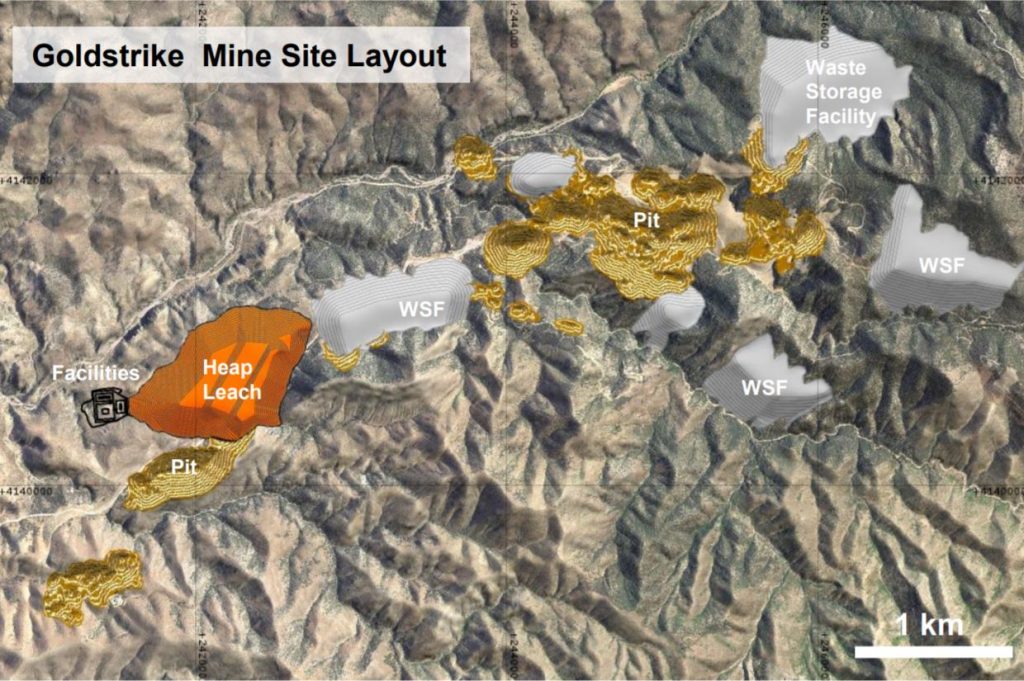 The Goldstrike mine site layout. (Image: Liberty Gold)[/caption] UTAH – Vancouver’s Liberty Gold Corp. has published a positive preliminary economic assessment for its Goldstrike oxide gold deposit 50 km northwest of St. George. The company says the PEA confirms the project has low capex requirement and low operating costs. Liberty is proposing an open pit, run of mine, heap leaching operation with a 7.5 year mine life. Production would follow a two-year construction period. The Goldstrike oxide project has an after tax net present value (5% discount) of $129.5 million (all figures are U.S. dollars) and an internal rate of return of 29.4%. The deposit contains an estimated 713,000 oz. of recoverable gold, and the annual average output would be 95,000 oz. of gold. The base case assumed a gold price of $1,300 per ounce. The pre-production cost would be $113.2 million assuming Liberty would do the mining. Life-of-mine sustaining capital will be $61.2 million plus $20.0 million for closure costs. Mining would proceed at 22,500 t/d of ore grading 0.48 g/t gold. Liberty will now begin the process of de-risking the Goldstrike project. It will consider increasing the resources in either the bedrock or through surface drilling. Inferred resources will also be upgraded, the mine plan optimized, and further metallurgical tests conducted. The Goldstrike property was previously mined from 1988 to 1994. See www.LibertyGold.ca for more information. [Readers should note that Liberty’s Goldstrike project is in Utah and Barrick’s Goldstrike mine is in Nevada. Both properties host Carlin-style deposits.]