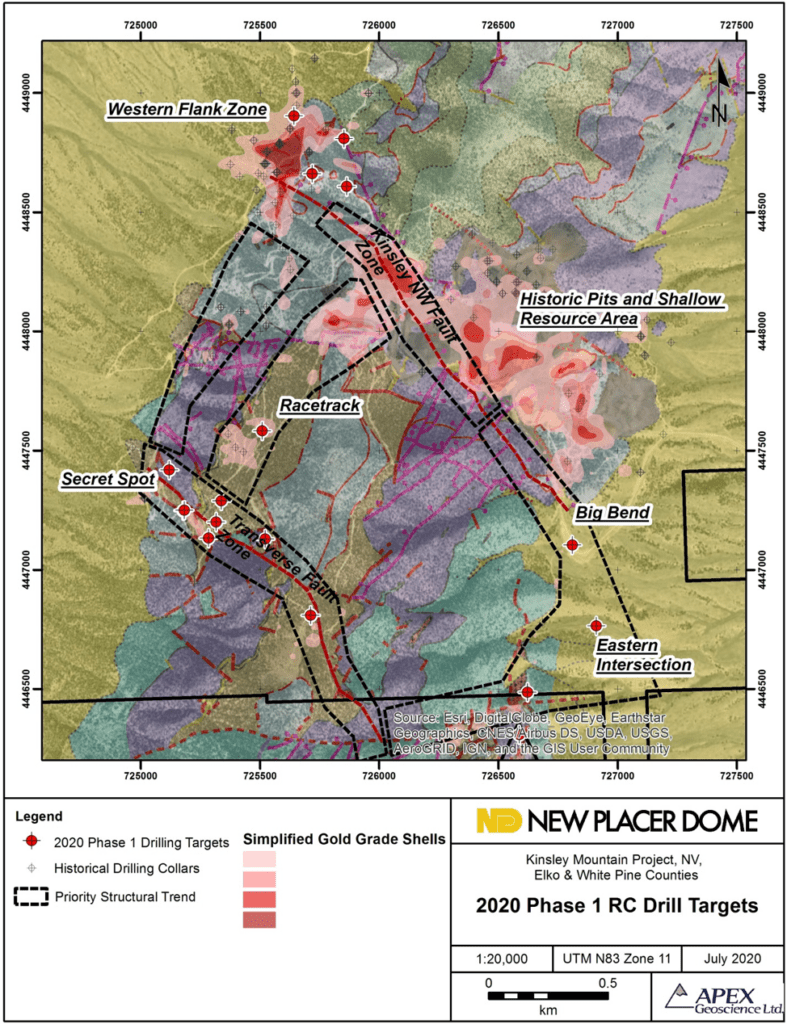 Targets at Kinsley Mountain Credit: New Placer Dome[/caption] NEVADA – New Placer Dome’s geology team and drilling crews are preparing for the company’s first, 10,000-metre reverse circulation (RC) drill program at the Carlin-style Kinsley Mountain project in the Elko area. The initial drill program will focus on testing high-grade gold targets within the Secret Canyon shale formation at the Western Flank zone, where known gold mineralization remains open (and untested) on strike and at depth. Additional drilling is planned for the Racetrack, Traverse, Big Bend and KN targets – these are at structural intersections with the Secret Canyon shale. “The focus of this exploration program is new high-grade gold discoveries. With only 20% of the property previously drilled, the Secret Canyon shale has more potential for high-grade gold-hosting formations on the property,” Maximilian Sali, the company’s CEO and founder, said in a release. “We intend to make those new discoveries this summer by aggressively drilling multiple targets at the same time with multiple rigs.” Based on the initial results, New Placer Dome is planning up to a further 10,000 metres of drilling to follow up on priority targets. In February, the company published a resource estimate for Kinsley Mountain, which includes contributions from the Secret Canyon and Dunderberg shale horizons as well as an oxide gold component. Total indicated resources stand at 4.9 million tonnes grading 2.63 g/t gold for a total of 418,000 oz. with a further 2.4 million inferred tonnes at 1.51 g/t gold containing an additional 117,000 gold oz. These resources are based on an open-pit mining scenario and were derived using cut-off grades between 0.2 g/t gold and 1.3 g/t gold. In December, New Placer Dome (formerly Barrian Mining) acquired the right to earn Liberty Gold’s 79.1% interest in Kinsley Mountain. The consideration for this transaction includes total payments of US$3.8 million and the issue of US$2.5 million worth of the company’s shares between 2020 and 2022. Upon closing, it also issued Liberty Gold a 9.9% equity stake in the company. Nevada Sunrise Gold holds the remaining interest in the project. The site produced 138,000 gold oz. from a heap leach operation between 1995 and 1999. Gold at Kinsley Mountain is mainly associated with shale units (additional mineralization is in breccias within limestones) and large-scale structures influence the majority of the gold placement. Past operations extracted the Dunderberg shale and overlying brecciated limestone. For more information, visit www.NewPlacerDome.com.