NORTHWEST TERRITORIES – Nighthawk Gold has released the results of seven drill holes completed within zones 3.5 and 3.0 of the Colomac […]
By Magda Gardner January 8, 2020 At 1:37 pm 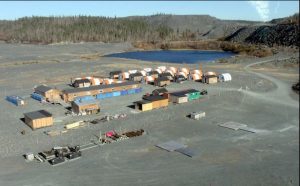 Colomac exploration camp Credit: Nighthawk Gold[/caption] NORTHWEST TERRITORIES – Nighthawk Gold has released the results of seven drill holes completed within zones 3.5 and 3.0 of the Colomac deposit at its 899-sq.-km Indin Lake property. The latest results suggest a widening of the host rock at depth over up to 3.5 km of strike. The company had previously identified a widening of the deposit at depth between zones 1.5 and 2.0 in December of last year. Drill highlights include: The drilling was focused on expansion and infilling of zones 3.5 and 3.0. Zone 3.5 is one of the higher-grade areas identified at Colomac to date. The company is planning additional drilling for the 3.5 km strike of host rock that separates the widening at depth identified between zones 1.5 to 2.0 and between zones 3.5 to 3.0. to confirm a universal widening of mineralization with depth. According to Dr. Michael Byron, Nighthawk’s president and CEO, “should this hold true, Colomac may become a much larger gold deposit and a stronger prospect for resource development with accelerated growth potential, as some areas have already shown expansions at depth to upwards of three times its near-surface width.” In addition, Nighthawk has announced that it has retained JDS Energy & Mining to complete an internal, non-NI 43-101 compliant scoping study to examine the economic potential of Colomac. The study will be based on the forthcoming resource update and will examine underground and open pit mining scenarios. An updated resource estimate is underway and is expected to be released in the first half of the year; it will include an update for Colomac as well as a maiden resource for Damoti Lake. The company is moving ahead with a 5:1 share consolidation, previously approved by shareholders in June and conditionally approved by the Toronto Stock Exchange. Current inferred resources for the project stand at 50.3 million tonnes grading 1.62 g/t gold for 2.6 million ounces, contained within five deposits. Colomac is a past producing open pit with historical production of approximately 500,000 oz. For more information, visit www.NighthawkGold.com.