TORONTO – Osisko Mining is raising $32.9 million through the private placement of approximately 7 million flow-through shares with a syndicate of […]
By Marilyn Scales November 14, 2019 At 4:33 pm 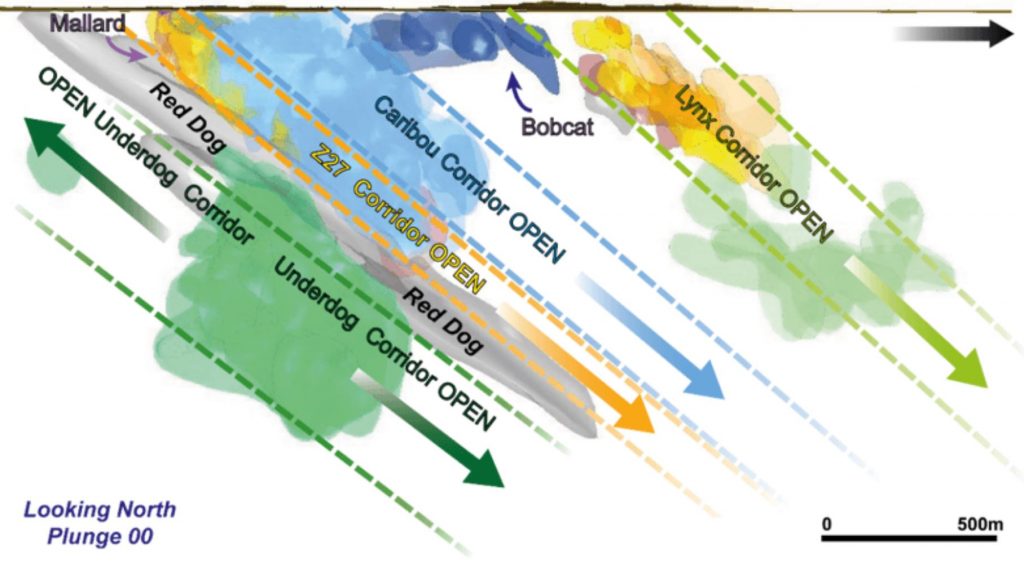 Longitudinal section of the Windfall mineralized corridors. (Image: Osisko Mining)[/caption] TORONTO – Osisko Mining is raising $32.9 million through the private placement of approximately 7 million flow-through shares with a syndicate of underwriters led by Canaccord Genuity. The shares were priced at $4.70 each. (Earlier today Osisko described the flow-through offering as being worth $25 million with 5.3 million shares for sale. By press time, the deal had grown to the larger numbers.) This is tranche one. Osisko also said it had entered into a second agreement for a bought deal purchase of approximately 4.4 million flow-through shares priced at $3.40 each for gross proceeds of $15 million. There is also an option for taking up 662,000 flow-through shares at the same price for an additional $4.9 million. This is tranche two. The underwriters’ option on the first tranche has also been increased to about 1 million flow-through shares priced at $4.70 each (up from 798,200 shares) for gross proceeds of $15 million. The proceeds of the sale will be spent on Osisko’s exploration projects. The company is active at the Windfall, Urban Barry Greenfields and Quevillon properties in Quebec. All are 100% owned by the company. Osisko’s most advanced project is the Windfall gold project in the Abitibi greenstone belt 200 km northeast of Val d’Or. Mineralization has been traced to a vertical extent of 1,200 metres in four zones. Using a cut-off grade of 3.0 g/t gold, the May 2018 resource estimate included 2.4 million indicated tonnes grading 7.85 g/t gold, containing 601,000 oz. The inferred resource was 10.6 million tonnes at 6.70 g/t gold, containing almost 2.3 million oz. A discussion of the Windfall geology is posted at www.OsiskoMining.com.