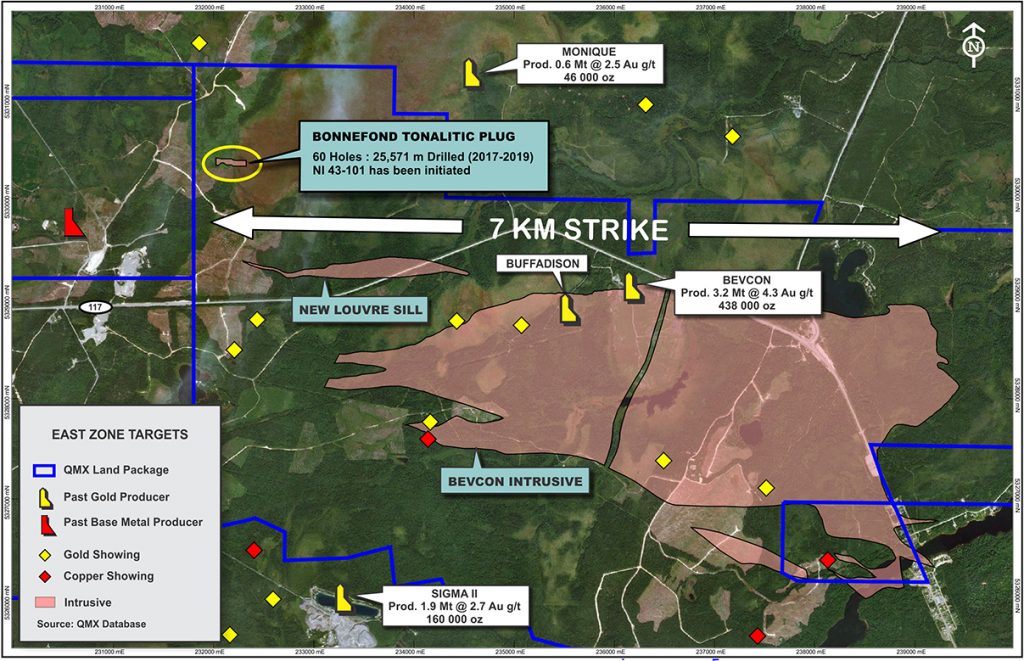 East zone targets at QMX's holdings Credit: QMX Gold[/caption] QUEBEC – Infill drilling at QMX Gold’s Bonnefond deposit has intersected near-surface, high-grade gold. The company has released six drillhole assays from the eastern half of this deposit, which targeted shear zones around a deeper intrusive unit. The drill highlights include 4 metres of 6.02 g/t gold starting at 131 metres and 4.5 metres of 21.29 g/t gold starting at 97.5 metres from shear zones south of the Bonnefond intrusive. Drilling targeting shear zones to the north of this unit returned 7 metres of 4.75 g/t gold starting at 90.5 metres and 15 metres of 2.1 g/t gold starting at 151.5 metres. “We are very happy to present fantastic results to the public again, and we will continue to build on the already existing resource at Bonnefond,” Andreas Rompel, the company’s VP of exploration, said in a release. Rompel added that QMX plans to continue drilling the shear zones at Bonnefond with additional drilling scheduled for the River and Poulmaque targets – at least 5,000 metres is planned for River and a further 3,000 metres is allocated for Poulmaque. The company’s infill work is now complete and QMX has started a 10,000-metre program, testing shear zones to the north of the current pit shell. A resource update for Bonnefond is expected in the next few months. With drilling at its 200-sq.-km Val d’Or land package ongoing, additional exploration results will be released over the summer and fall. The Bonnefond deposit is within the eastern end of the Val d’Or holding. Last year, QMX released a maiden pit-constrained resource for Bonnefond, with measured and indicated resources of 4.8 million tonnes grading 1.69 g/t gold, containing 258,700 gold oz. and a further 2.4 million inferred tonnes at 1.87 g/t gold, containing 145,100 oz. The majority of these resources are within the intrusive unit – shear zones contribute 72,000 inferred oz. to this total. Last year’s estimate is based on a 0.75 g/t gold cut-off grade. For more information, visit www.QMXGold.ca.