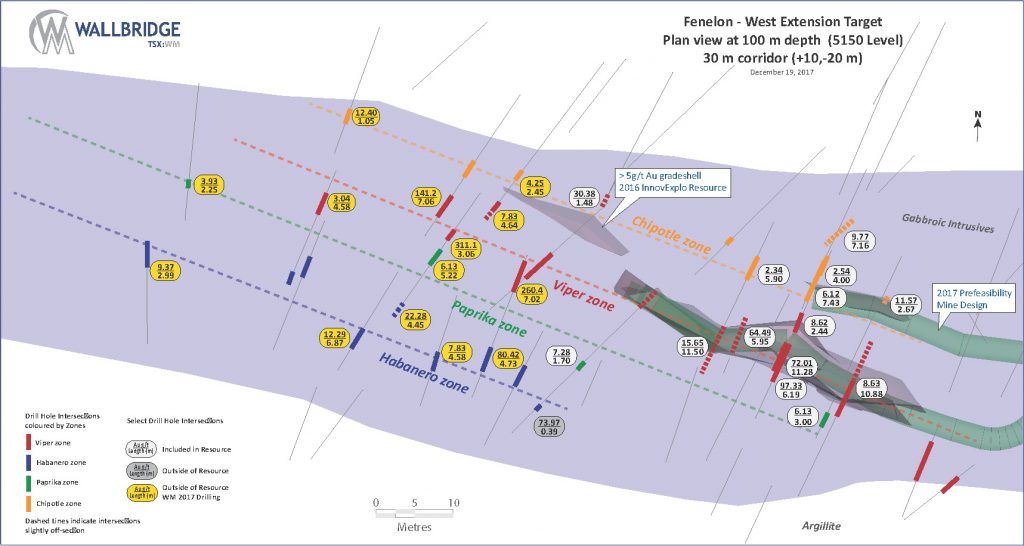 Fenelon plan view Credit: Wallbridge[/caption] QUEBEC – Days after announcing a $110-million all-share acquisition of Balmoral Resources to expand the Fenelon project, Wallbridge Mining has released drill results from its portion of Fenelon, which expand the mineralized zones and suggest additional mineralization in the hangingwall. The high-grade portion of the Tabasco zone has now been traced over 500 metres of strike, extended by 100 metres, and has a down-dip extent of 500 metres. Drill highlights from this zone include 32.5 metres of 4.31 g/t gold and 43.7 metres of 3.37 g/t gold; it remains open on strike and at depth. In addition, drilling at the Cayenne zone intercepted 15.6 metres of 4.61 g/t gold, 75 metres down-dip of intercepts reported in July. At the Main Gabbro zone, definition drilling expanded the known high-grade shoots, intersecting 6 metres of 40.66 g/t gold. “We are now seeing several well mineralized splays of the Tabasco and Cayenne shear systems at depth along the edge of the Jeremie Pluton and in the sediments,” Attila Pentek, the company’s VP of exploration, said in a release. “In particular, a shear zone right at the contact of the pluton, now referred to as Lower Tabasco South, is showing excellent continuity from hole to hole.” Within the Area 51 vein network, in the hangingwall of the Tabasco-Cayenne shear system, drilling intersected wide intervals of lower-grade mineralization, with local zones of high-grade material. Intercepts include 58.9 metres of 1.05 g/t gold, 16.2 metres of 3.34 g/t gold and 16.4 metres of 1.54 g/t gold from the Jeremie Pluton as holes are drilled to test the Tabasco-Cayenne system. “The fact that many of these drill holes intersect multiple potentially mineable zones in Area 51 as well as the Tabasco-Cayenne shear system makes our drill program very efficient, allowing for low per-ounce discovery cost,” Marz Kord, the company’s president and CEO, said in a release. “We are outlining a significant mineralized vein network in Area 51 in addition to our continuously expanding high-grade Tabasco-Cayenne shear system,” Pentek added. Of the six rigs active at the project, four are testing the Tabasco zone. One rig is completing closely spaced definition drilling of the Main Gabbro zones from underground, at a total rate of approximately 9,000 metres a month. Assays are pending for an additional 8 surface and 36 underground holes. For more information, visit www.WallbridgeMining.com.