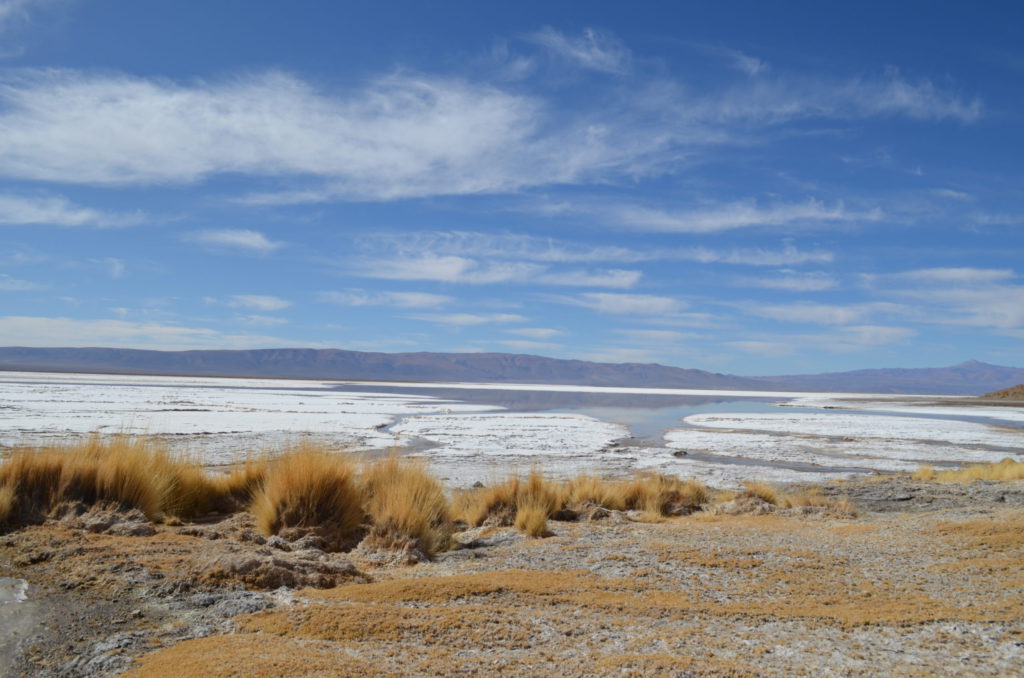 Argentina Lithium is in good company on the Rincon Salar, or salt lake, which has also attracted several other mining companies, including Argosy Minerals and Rio Tinto. Josefina Di Pietro photo

Argentina Lithium & Energy (TSXV: LIT, US-OTC: PNXLF), a member of the Vancouver-based Grosso Group of companies, is aggressively assembling a portfolio of lithium properties in northwestern Argentina as demand for the battery mineral continues its upward trajectory.

“The lithium market had a couple of false starts, but this time is different,” said Nikolaos Cacos, the company’s president and CEO. The price of lithium carbonate has increased dramatically, he noted, from US$2,000 to US$3,000 per tonne seven or eight years ago to an all-time high of $84,000 in October. “So, it’s really been stratospheric, and it continues to defy even analysts’ expectations.”

A BloombergNEF study presented at the United Nations climate talks in Egypt in mid-November estimated that 10.6 million electric battery and plug-in hybrid passenger vehicles would be sold in 2022, a 61% increase over the prior year. And an estimated 56% of them would be sold in China, the global leader in electrification.

“Argentina underwent a serious lockdown,” recalled Cacos. “You couldn’t travel between provinces. It was really hardcore, but we were fortunate that we had a lot of people on the ground in these areas and there was no competition because of the lockdown, so we could swoop in and pick up some really choice properties.”

“Over the last 30 years, we’ve made four major discoveries in the country,” Cacos said. “Joe Grosso has been inducted into the Argentina Mining Hall of Fame because of his pioneering efforts to help the country get going in the mining exploration industry. It was our reputation for transparency and honest business practices that allowed us to make deals with the property owners.”

‘Off to the races'

Argentina Lithium didn’t waste any time exploring its flagship Rincon West property in the country’s Salta province, spending close to $3 million conducting geophysics and commencing a nine-hole reverse-circulation drill program at depths of up to 400 metres through 2022. A transient electromagnetic survey indicated the potential for lithium brines under 60% of the property and early drill results reported in October included lithium values of 334 to 382 mg per litre over a continuous interval of 132 metres.

“Argosy Minerals, an Australian company with an $800-million market cap, has reported a 250-million-tonne lithium resource on the eastern side of the same salar and has plans to go into production next year,” Cacos said. “And Rio Tinto spent US$825 million acquiring a property right next to us.

“The results from the first four holes we drilled all confirm lithium grades and intersections in line with the kind of numbers that both Rio Tinto and Argosy have published, so we feel we are off to the races.”

Argentina Lithium has budgeted $10 million to continue its drill program at Rincon West in 2023 and expects to publish a “significant resource” by April or May.

“Then we’ll move south to our Antofalla North property,” Cacos said. “That’s a priority for us because the world’s largest lithium producer, Albemarle owns the entire central section of the salar and we own the northern section. They haven’t published what they have, but they have stated that they have what they believe is the largest lithium resource in Argentina.”

Other properties in the company’s portfolio include Pocitos and Incahuasi. At Pocitos, it has a 100% interest in approximately 158.6 sq. km of claims in 11 continuous mining concessions on the east side of the salar, as well as an additional 103.6 sq. km in three blocks to the east and south. At Incahuasi, another salar, it has a 100% interest in 250 sq. km of ground.

“The salars we’ve been targeting are not the really high-grade ones with lithium concentrations of up to 800 milligrams per litre,” said Cacos. “They’re harder to find and very expensive. We’re targeting mid-grade brines with 300 milligrams per litre lithium or better and focusing on projects in areas close to infrastructure, including railroad lines, roads and power lines that offer better economics.”

“A few years ago, the only way to get lithium out was to pump the brine to surface and lay it on these flat beds to evaporate it. That was a multi-year process. You needed very, very high grades of lithium in order to make it work and you had to be concerned about other minerals present in the brine contaminating the process. It was complex, time consuming and expensive,” he said.

“Direct lithium extraction technologies, by contrast, are able to remove the lithium ions from the brine very effectively even down to extremely low grades so even lithium deposits of 60 or 70 milligrams per litre can be economic. The process is also agnostic to any other minerals in the brine and is more environmentally friendly.”

Argentina Lithium has no plans to take any of its four lithium projects into production itself. “We recognize that we’re explorers and pretty good at it,” Cacos said. “We’ve always viewed production as a different business. Our expertise is paying a few million dollars and defining something that’s grassroots, then selling it for $500 million or more. By that point our investors will already have seen a return on their investment, and we can pass the project on to an experienced producer. We could sell out completely or take a small portion as a carried interest or a royalty.”

In late November, Argentina Lithium raised a little more than $9 million in a non-brokered private placement to fund its 2023 exploration program after initially setting a target of $6 million. “The investor interest was especially gratifying given the current market environment,” Cacos said. “Since the demand was there, we decided to fund the entirety of the 2023 exploration budget. In fact, we ended up having to turn investors away.”

The preceding Joint Venture Article is PROMOTED CONTENT sponsored by Argentina Lithium & Energy. and produced in co-operation with The Northern Miner. Visit www.argentinalithium.com for more information.