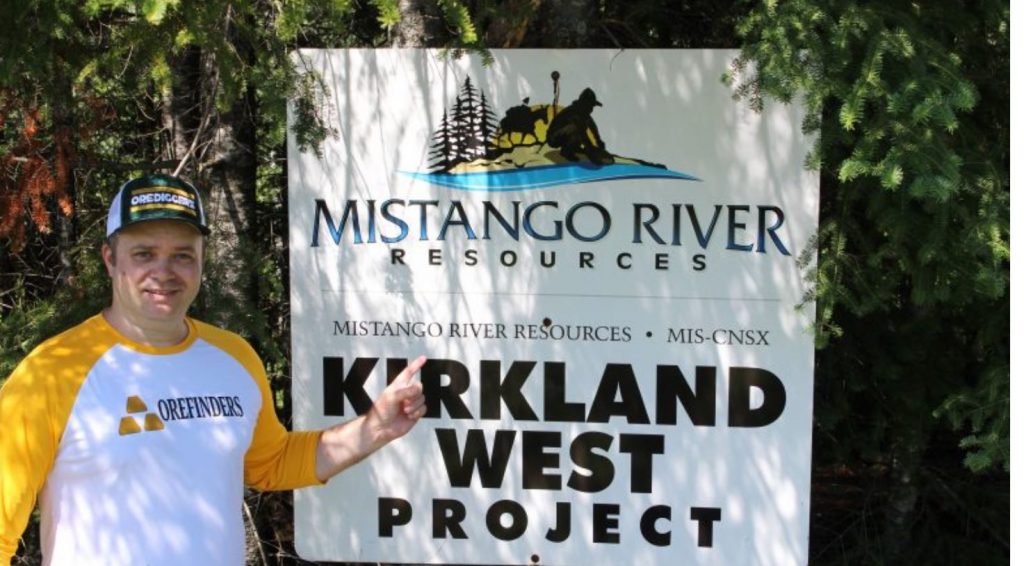 Under the proposed partnership agreement, Kirkland Lake Gold has acquired a 9.9% stake in each of the juniors. Additionally, Kirkland Lake will also have the option to acquire up to a 75% interest in specific projects under the companies’ portfolio of assets in exchange for a total combined $120 million investment. This is the second high-profile investment that Orefinders and Mistango have received in the last year as billionaire investor, and former chairman of Kirkland Lake Gold, Eric Sprott has made four separate investments into the two companies over that period.

Kirkland Lake Gold’s financial and technical support will allow both companies to advance key projects in the Kirkland Lake district of Ontario, said Stewart. “We are excited to partner with a top-tier operator like Kirkland Lake Gold, particularly as they are our immediate neighbours in the region.”

The partnership, he continued, will help de-risk the companies and “provide us with more kicks at the can to make that billion-dollar hole discovery.”

A drill rig out in the field. Credit: Mistango River Resources.[/caption]

“It also gives us great optionality with the combined treasuries of the two companies at over $15 million in cash and well over $20 million in working capital. With Kirkland Lake Gold using their capital to fund our exploration, this means our companies’ treasuries can be used for creative and accretive deployment as our group has done over the past number of years.”

The deal, he added, is also excellent for the shareholders of Orefinders and Mistango, “who will sleep better knowing” that a first-class operator like Kirkland Lake Gold is on board.

Orefinders and Mistango are part of the Ore Group of junior mining companies, which also includes American Eagle Gold (TSXV: AE), QC Copper and Gold (TSXV: QCCU; US-OTC: QCCUF), Baselode Energy (TSXV: FIND; US-OTC: BSENF), and soon to be TSX Venture-listed D Block Discoveries. Chaired by Stewart, the group is a Canadian-based natural resource discovery and development organisation that has a track record of acquiring assets that generate value for their participating companies and their shareholders.

“Ore Group was formed to bring motivated people, assets, and capital together to make discoveries that generate value for our shareholders,” explained Stewart. “We acquire companies or projects, then build a team around those assets and finance them.”

He noted that before gaining control of Mistango in late 2019, Orefinders had a long and drawn-out proxy battle with Mistango’s previous management, which was targeted because the company had “a lot of similarities with Orefinders in terms of assets and jurisdiction, but its management team was not performing.”

The long-term partnership with Kirkland Lake Gold will provide significant capital for the companies, which Stewart noted will all go into the ground to advance the projects quickly.

“Kirkland Lake has an exceptional balance sheet and has one of the lowest operating cost profiles in the industry, and like all miners they are looking for growth. I believe it is this growth and optionality which drove their investment in Orefinders and Mistango,” said Stewart, who has over 20 years of experience in the mining industry and is also chairman of the Young Mining Professionals Global Group and founder of its scholarship fund, the largest mining-focused charitable organization that supports mining engineering and geology education in Canada. With master’s degrees in finance and science, he describes himself as a “financial engineer” focused on capital allocation.

Kirkland Lake Gold already operates two world-class assets in Ontario, including its flagship Macassa underground mine and the Detour Lake gold mine with a mine life spanning multiple decades.

The projects covered by the partnership agreement, Stewart said, offer Kirkland Lake Gold game-changing assets within one of the most prolific gold-bearing districts in the world. “Between Orefinders and Mistango, we have the third-largest land position in the district, just behind Angico Eagle and, of course, Kirkland Lake Gold.”

The partnership, he added, is a testament to the quality of the assets and management teams of Orefinders and Mistango and provides comfort to current and potential future shareholders of the companies that the assets are in “excellent hands.”

The investment by Kirkland Lake not only bolsters the treasury for each company, explained Stewart, but also means that the juniors will not be spending on existing assets, which, he said, frees up capital to explore for other potential opportunities in the region.

“Using their technical expertise and knowledge of a region they have operated in for a long time allows us to advance the portfolio of assets and to look for new orebodies to create further value for our shareholders,” he said.

The first project to be advanced under the partnership should, he said, be Mistango’s Kirkland West project.

The project is contiguous with Kirkland Lake Gold’s Macassa mine and is believed to be a western extension. Macassa contains proven and probable reserves of 3.2 million tonnes grading 21.9 grams gold per tonne for 2.25 million contained gold ounces and is expected to double its gold production with the completion of Macassa #4 shaft in 2022. (In 2020, Macassa produced 183,038 ounces of gold.)

The prospect of proving that Kirkland West is a continuation of Macassa is just “too tempting,” and aside from Mistango’s shareholders, nobody would benefit more than Kirkland Lake Gold, Stewart said. “So, we’re eager to re-start drilling on the project, as we believe it offers the biggest bang for our buck and would be extraordinarily valuable for our shareholders. It also offers the best odds of finding that billion-dollar drill hole.”

The project is also adjacent to Agnico Eagle Mine’s (TSX: AEM; NYSE: AEM) landholdings in the area, which hosts over 4.6 million gold ounces. It is bound to the south by the Kirkland Lake mining camp and to east by Gold Candle Ltd.’s past-producing Kerr Addison mine, which produced more than 12 million ounces of gold over a 58-year mine life before closing in 1996, and has recently been redefined as a six-million-gold-ounce open pit resource.

The 4,300-hectare Kirkland West property comprises the Baldwin and Eby zones and hosts the past-producing Baldwin mine, which between 1929 and 1938 produced 43,000 ounces of gold from 81 milled tonnes at a recovered grade of 18.6 grams per tonne.

The company has completed 18 drill holes totalling 7,014 metres to date, with nine of the 18 holes targeting structures proximal to and along strike of the Baldwin mine within the Larder-Cadillac Fault Zone. However, drilling on Kirkland West was paused on April 30 due to exceedingly difficult ground conditions arising from an early spring thaw. Mistango is awaiting results from over 30% of the assays from its winter drill program on the property.

The 681-hectare McGarry property, on 2.4 km of the Cadillac Larder-Lake Break, was put into operation by the previous owners following a 2013 preliminary economic assessment (PEA) and has infrastructure in place, including a shaft, hoist, offices, and core shack.

The property is immediately west of and adjacent to the Kerr-Addison mine, with Gatling Exploration’s (TSXV: GTR; US-OTC: GATGF) Cheminis mine and Bear Lake deposits also lying to the west.

The property hosts the Barber-Larder deposit, which was mined as an open-pit operation between 1987 and 1988, and numerous gold mineralized zones offering several potential exploration targets.

Orefinders recently completed an extensive, property-wide Induced Polarisation and ground-based Magnetotellurics (MT) survey of McGarry, said Stewart. “The MT survey allowed us to look deep underground, which has never been before done, and was very surprising to us given its proximity to a world-class mine. So, that’s where my vote is going to go for where the next drill program for Orefinders should start.”

The next project for exploration, he added, should be Mistango’s Omega project, about 30 km east of Kirkland Lake and adjacent to McGarry and the Kerr Addison mine.

“Between our assets and those of the majors Kirkland Lake Gold and Agnico, the Kirkland Lake district has the potential to re-emerge as a world-class mining camp,” he said.

The remaining projects include Orefinders’ Knight and Mirado.

The Knight property, 110 km southwest of the Kirkland Lake-Larder Lake camp, hosts several targets, all within a kilometre or two of each other. The mineralization at Knight is consistent with a mineralized porphyry system that has the potential of developing into a large, open-pittable deposit.

The Mirado project, about 35 km southeast of Kirkland Lake, is a past-producing underground mine and is interpreted as a gold-rich VMS system with a gold-rich stringer footwall at the South zone overlain by a zinc and gold-rich embedded hanging wall at the North zone.

Under earn-in option agreements, Kirkland Lake Gold will have the option to acquire up to an undivided 50% interest in Orefinder’s Mirado, McGarry, and Knight and Mistango’s Kirkland West and Omega projects over five years, and is contingent on Kirkland Lake spending a total of $20 million in the ground. During this period, Orefinders and Mistango will continue to operate their respective projects.

“Although we haven’t yet finalized our plans on how and where the $120 million invested by Kirkland Lake Gold will be spent, we expect to release the exploration program soon,” said Stewart.