JV Article: Trillium Gold and the resurgence at Red Lake

Imagine the value of 50 gold mines along the same stretch of highway. Current worth compared to historical value is what sparked […]
By Magda Gardner April 12, 2021 At 2:13 pm 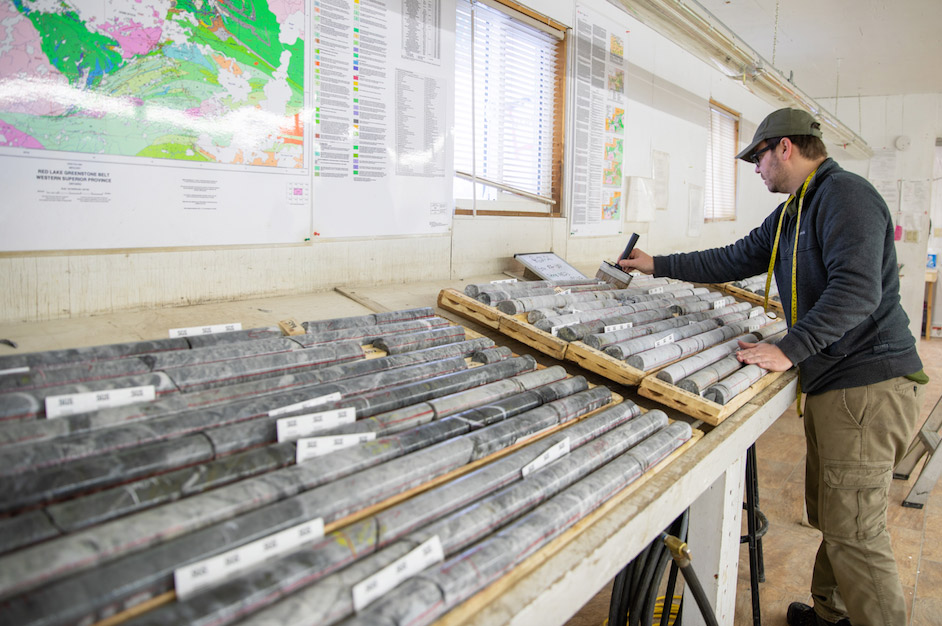 Newman Todd drill core. Credit: Trillium Gold Mines[/caption] Imagine the value of 50 gold mines along the same stretch of highway. Current worth compared to historical value is what sparked Trillium Gold Mines (TSXV: TGM) CEO Russell Starr's vision when he began assembling what is now the second largest land package in Ontario’s Red Lake mining district – Newman Todd, Rivard and Gold Centre, a large part of the Confederation Greenstone. With the discovery of gold on the shores of Red Lake in 1925, a legendary North American gold rush began. Knowing this history, was key to Starr’s vision of a Red Lake resurgence and positioning Trillium Gold as a dominant player in the area. Historic mines were massive producers in what would turn out to be one of the world’s most prolific mining districts. Campbell mine produced more than 11 million ounces of gold over 50 years, and in the mid-1990s, Campbell’s new owner, Goldcorp, discovered a new high-grade deposit. The mine would go on to extract some of the richest ore ever found in the world. [caption id="attachment_1003746836" align="aligncenter" width="550"] Newman Todd site. Credit: Trillium Gold Mines[/caption] Big players are investing in Red Lake, banking on one of the most abundant high-grade gold rich districts in the world. In 2019, Australia’s Evolution Mining took over Campbell Red Lake, and is now investing hundreds of millions of dollars to modernize the operation, and just recently Evolution bought Battle North Gold (formerly known as Rubicon). Ready to be an integral part of the renaissance, Trillium Gold Mines, over the last year, has grown from two assets to become the second-largest landholder in Red Lake. TGM wants to ignite a new golden age of discovery. The company is well financed, after raising over $10 million for exploration last fall. Trillium’s Newman Todd property – with about 55,000 meters of historical drilling and high grade gold intersections – is tapping into the same balmer volcanics that host Evolution’s mines. "If you walk the Rivard property, every 15 or 20 metres you'll see a quartz vein. If you look closely, you'll see visual gold. Our Rivard veins are juicing up the Newman Todd structure, which is an extraordinarily massive breccia body – about five kilometres long, and about 400 metres wide, laden with gold, it’s everywhere,” Starr said. The breccia at Newman Todd itself is mineralized with lower grade gold, but when the Rivard high grade veins intersect the Newman Todd structure, you get much higher [grade] gold. If you look at some of the historical figures, they are staggering - like 30 metres at 15 grams per tonne.” The Red Lake camp is famously known for high-grade gold mineralization at depth. Trillium is testing various drill orientations to develop a comprehensive understanding of the mineralization and structural controls and test the depth potential of the NT Zone. But presently all of the drilling is from surface to only 400 meters of depth. Newman Todd is a highly prospective target with 41% of the 165 historic drill holes having intervals of greater than 10 g/t gold over various lengths. Nearly all drilling has been conducted to depths of less than 400 metres. [caption id="attachment_1003746841" align="alignright" width="213"] Trillium Gold property. Credit: Trillium Gold[/caption] The property is about 40 km from Great Bear's Dixie, and only about 18 km from Evolution’s Red Lake Mine, and part of the same geological structure. To date, Trillium has drilled 65,000 metres with more drills turning in the area of Red Lake that has never been drilled for mineralization. Drill results from the last four holes of the 2020 drill campaign totaling 1,862 metres are in, showing values up to 36.63 g/t Au over 1.0 metre. This brings total drilling at Newman Todd in 2020 to 6,081 metres in 16 drill holes, the first drilling since 2013 on the property. Previous drilling on the Newman Todd Zone from 2013 and earlier had mostly focused on testing the Zone by targeting the footwall with drilling toward the southeast.  It’s now known to be subparallel to gold mineralized veining and structures, potentially missing high-grade intersections or undercutting much of the targeted zone. "Drilling at Newman Todd continues to deliver gold even as we step towards the northern boundary. These results have aided us significantly in our reinterpretation of the structures controlling mineralization within the NT Zone and have helped with the new modeling, which is directing our current drilling," said Bill Paterson, Trillium's VP of exploration. "The 2020 drilling can be considered a success in that it has returned significant high-grade gold results as well as validating our understanding of the NT Zone, and has laid the foundation for future drilling to target the structural and veining controls," Starr said. “We are hopeful and believe we have the next mine in Red Lake.” The preceding Joint-Venture Article is PROMOTED CONTENT sponsored by Trillium Gold, and produced in cooperation with the Canadian Mining Journal. Visit www.trilliumgold.com for more information.