Gold-focused royalty and streaming company Maverix Metals has entered into a binding agreement with Newmont to acquire a portfolio of 11 gold […]
By Magda Gardner September 21, 2020 At 12:26 pm 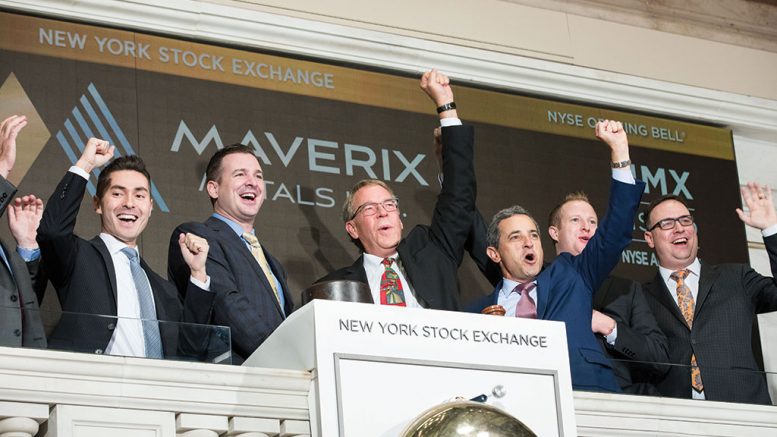 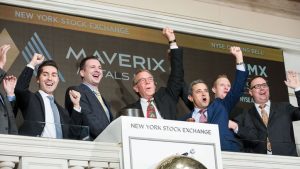 Geoff Burns (centre), Maverix Metals cofounder and chairman, opens the New York Stock Exchange in 2019. Credit: Maverix Metals[/caption] Gold-focused royalty and streaming company Maverix Metals has entered into a binding agreement with Newmont to acquire a portfolio of 11 gold royalties on preproduction assets in the Americas. In exchange for the portfolio, Maverix will issue 12 million common shares to Newmont and pay the major US$15 million in cash – the two components are valued at US$75 million – with up to a further US$15 million due if production milestones at some assets are reached within five years of closing. The royalty portfolio includes interests in Orla Mining’s, Bluestone Resources’, Corvus Gold’s and KORE Mining’s flagship assets. In a release, Dan O’Flaherty, Maverix CEO, noted how this acquisition will grow the company’s royalty holdings. “This transaction marks another important milestone in our continued growth at Maverix. The acquisition of these high quality royalties enhances our existing portfolio and adds to our already robust pipeline of development assets.” Of the 11 project royalties acquired, one is in the construction stage; four are in the development stage; and six are exploration projects. A 2% net smelter return (NSR) royalty on the oxide and transitional ore at Orla Mining’s Camino Rojo project is the most advanced asset in the portfolio. Camino Rojo lies 50 km southeast of Newmont’s Penasquito mine. A feasibility study completed on the project last year outlined a heap leach operation producing an average of 97,000 gold oz. and 511,000 silver oz. over an initial life of over six years. Orla expects the project to start producing in 2021. The royalty package also includes a 1% NSR on Bluestone Resources' (part of the Lundin Group) Cerro Blanco project in Guatemala. The proposed high-grade underground gold-silver project would, based on a 2019 feasibility study, produce 113,000 gold oz. annually over an eight-year mine life. Early works are expected to start by the first quarter of next year. In the U.S., the portfolio includes a sliding scale NSR (between 1% and 2%) on Corvus Gold’s past-producing Mother Lode project in Nevada and a 1% NSR on KORE Mining’s Imperial project in California. In Mexico, Maverix has acquired a 2% NSR on the Ana Paula project. On Sept. 11, the project was sold by Argonaut Gold to a private company, which intends to create a new public gold development entity. The transaction with Newmont is expected to close on or before Oct. 30; the deal is subject to TSX and Maverix shareholder approval. Upon closing, Newmont would hold approximately 30% of Maverix, versus its existing 23.4% interest in the royalty company. Maverix currently holds 105 royalties and streams on 13 producing assets. For more information, visit www.MaverixMetals.com.