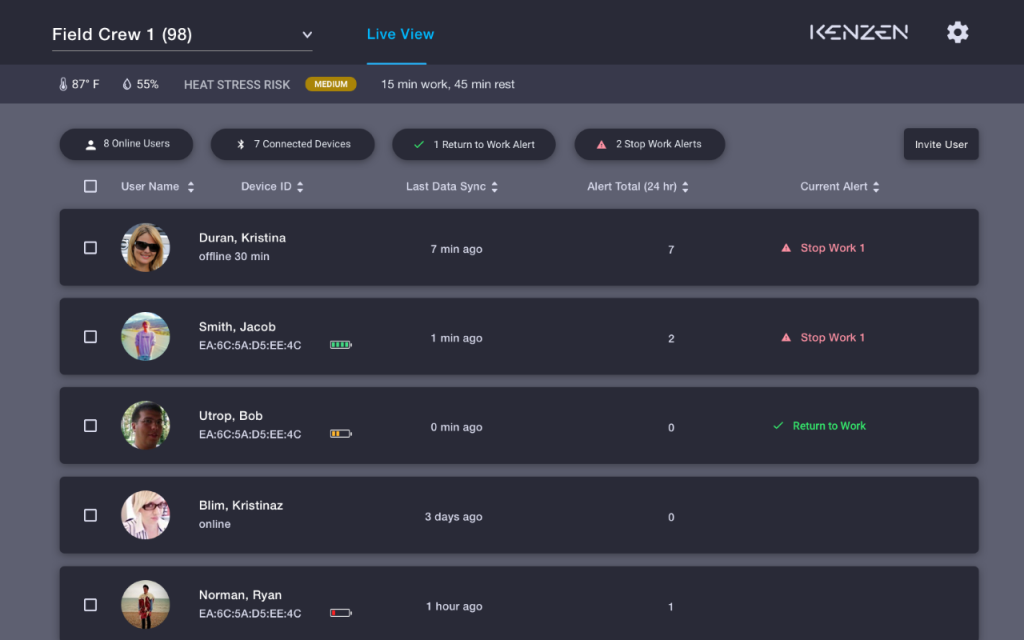 Kenzen system snapshot Credit: Kenzen[/caption] NEW YORK - Kenzen, a company focused on smart and innovative personal protective equipment (PPE), has launched a real-time worker heat monitoring system. The cloud-based Software as a Service (SaaS) system includes a wearable device worn by workers on their arm, which alerts the worker and their supervisor when core body temperature is too high. Real-time alerts allow for intervention to keep workers safe from heat injuries. The wearable, via its advanced sensor complement, monitors multiple physiological and environmental metrics, including heart rate, activity, skin and ambient temperatures. Together, this sensor data allows real-time prediction of core body temperature and provides alerts to workers and supervisors. Kenzen’s multi-level alerts are sent to workers via device vibration, iOS or Android app notification, and to supervisors through a web dashboard. Alerts are accompanied by actionable recommendations with a second alert indicating when the core body temperature has returned to a safe level. Data captured by this system can be used to help companies identify heat risk and proactively manage outcomes. “The Kenzen system is all about prediction and prevention. Heat related injuries are 100% preventable but potentially deadly and difficult to detect until it’s too late,” Heidi Lehmann, chief commercialization officer for Kenzen, said in a release. This system has been piloted on worksites worldwide in the construction, field services, power, oil and gas, and renewable energy industries. Kenzen also expects to receive Intrinsic Safety (IS) certification for its system later this year – this is a prerequisite for use in many mining environments. According to the company, once approved, the system would be among the first smart PPE products to receive Zone 0 IS certification, which authorizes safe operation of electrical equipment in hazardous areas where any thermal or electrical malfunction is catastrophic. Kenzen is sold as a subscription on a per-worker, per-month basis. Founded in 2014, Kenzen is the premier physiological monitoring platform to keep work forces safe from heat, fatigue and over exertion on the job. For more information, visit www.Kenzen.com.