PureGold sends first ore to the mill in Red Lake

Emerging miner Pure Gold Mining has introduced first ore to the mill at its PureGold mine in Red Lake, Ont. With first […]
By Canadian Mining Journal Staff December 16, 2020 At 12:49 pm 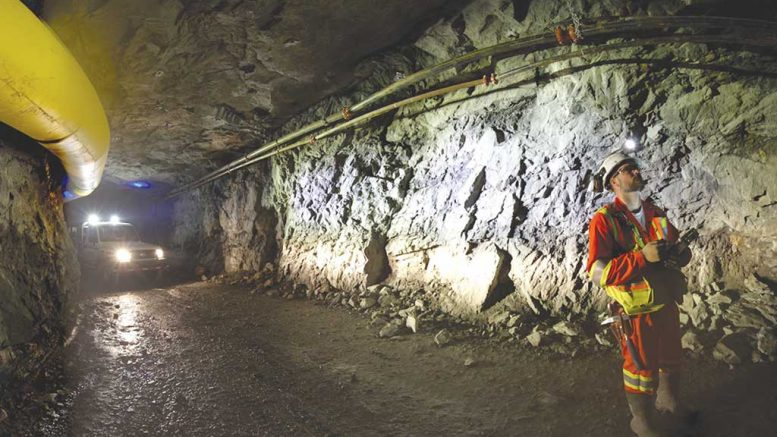 Underground at the PureGold mine Credit: Pure Gold Mining[/caption]

Emerging miner Pure Gold Mining has introduced first ore to the mill at its PureGold mine in Red Lake, Ont. With first gold production expected later this month, the company will moving on to a full-scale ramp up of the mining and milling activities in the next quarter.

“The introduction of ore to the milling facility reflects the successful culmination of our project build, and signals the commencement of the next chapter in our company’s evolution as Canada’s newest gold mine,” Darin Labrenz, the company’s president and CEO, said in a release. “We have taken the PureGold Mine from our first drill hole to production in less than six years.”

There are over 21,000 tonnes of broken ore available at the site and, with the ore now in the grinding circuit, crushing has started. The initial ore feed was at a rate of approximately 25 tonnes per hour (or 600 tonnes per day). The mills have operated, for limited periods, at their nameplate capacity of 800 tonnes per day without any operational problems.

The comminution step is followed by gravity concentration to recover free-milling gold and then pre-oxidation, leaching, a carbon-in-pulp circuit as well as electrowinning and refining to produce gold dore. First gold is still expected before the end of this year. The grinding, gravity and CIP circuits are operating as expected and activities are now focused on optimizing the instrumentation and controls of the mill process systems.

On the underground development front, PureGold has approved and collared a second ramp at the northeast end of the mine. The East portal and its associated ramp are expected to provide a second mining centre and provide access to stopes in the east end of the mine 12 months earlier than anticipated by the feasibility mine plan, while also improving productivity and providing an opportunity for a potential mine expansion. The second ramp is also anticipated to allow the company to access higher-grade ore to increase cash flows in the early years of mine life.

With an Amended Environmental Compliance Approval (ECA) for industrial sewage works and an amended ECA for air and noise emissions, Pure Gold is permitted for production.

The PureGold mine is the second operating mine in the Red Lake area and currently employs over 200 people, with the workforce expected to average 350 over its 12-year, first phase operations.

The company currently has $58 million in cash.