Ahead of a prefeasibility study expected this quarter on a restart of the Kiena mine complex in Quebec, miner Wesdome Gold Mines […]
By Marilyn Scales April 13, 2021 At 1:15 pm 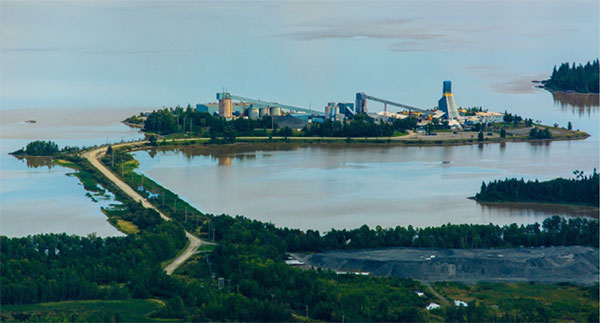 Ahead of a prefeasibility study expected this quarter on a restart of the Kiena mine complex in Quebec, miner Wesdome Gold Mines (TSX: WDO) has announced the results of bulk sample processing from the high-grade Kiena Deep A zone. The processing results slightly exceed the grades suggested in the December 2020 resource for the underground complex and confirm the continuity of the high-grade A and A1 zone mineralization.

The Kiena mill processed 7,032 tonnes of the bulk sample, recovering 6% more gold than predicted by the mineral resource. Feed grades of 15.7 g/t gold where ahead of model grades of 14.7 g/t gold and, with recoveries of 98.2%, produced 3,479 gold oz.

“We are very pleased with the results of the bulk sample that confirmed the continuity of the high-grade gold mineralization of the A zone, but more importantly demonstrated a 6% positive reconciliation in the number of ounces recovered from the bulk sample compared to the resource block model. This is very positive and provides confidence in the resource estimate for future mining,” Duncan Middlemiss, Wesdome president and CEO, said in a release.

To obtain the bulk sample, Wesdome blasted 66 rounds. The company also completed a geotechnical assessment, and mapped, photographed and sampled the faces from each round to assess the strike continuity of the high-grade gold in the A zone. Material processed at the mill was sourced from the Kiena A and A1 zones, milled at throughputs of up to 41 tonnes per hour.

Underground exploration is targeting extensions of the A and VC zones at Kiena; Wesdome is also ramping up a surface exploration program at the property.

A May 2020 preliminary economic assessment on a restart of the mine outlined an eight-year operation, producing an average of 85,931 oz. gold annually at AISCs of US$512 per oz with an initial capital cost estimate of $35 million.