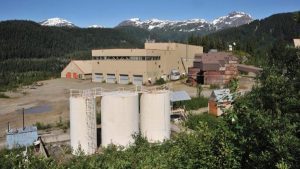 Ascot Resources has hit a new, high-grade zone of gold mineralization, dubbed the Day zone, in drilling at its past-producing Premier gold project in B.C. The zone is located 5 km north of the existing Premier mill and 300 metres west of the planned underground development at the Big Missouri deposit.

All of the three holes reported from the Day area hit intervals of gold mineralization at two different elevations; the mineralized sections start within the first 74 metres down hole. Drill highlights include 4.1 metres of 20.62 g/t gold starting at 154.9 metres and 2.05 metres of 54.6 g/t gold from 161.45 metres.

In a release, Derek White, the company’s president and CEO, highlighted the potential of this new area:

“We are excited about the discovery of another strategically located high-grade zone that could be transformative for Ascot,” he said.

Drilling is also designed to test the strike extensions of Day, as “the potential for additional resources in this area appears to be very high,” according to the press release.

A total of six holes have been completed at Day to date – assays for three remain pending.

Ascot also released assay results for seven westernmost drill holes completed at the Premier West zone, which suggest a flatter-than-expected dip for this zone. Notable intercepts in the release include 6 metres of 3.53 g/t gold from 268 metres and 2.4 metres of 1.15 g/t gold starting at 263.35 metres.

Follow-up drilling will require perpendicular drill holes, from an alternative drill pad, and is aimed for later this year. According to White, these seven latest holes “improved our understanding of the orientation and boundary of the high-grade mineralization (at Premier West).”

Additional assays are also pending for the Silver Hill area and Ascot is starting to drill the Woodbine target.

Ascot is working to restart mining at the Premier site, which generated 2 million gold oz. and 45 million oz. of silver between 1918 and 1952.

In April, the company released a feasibility study on a restart of the project, which defined an underground operation producing an average of 132,375 oz. of gold and 370,500 oz. of silver annually over an 8-year life at all-in sustaining costs of US$769 per oz. Based on a capital cost estimate of $146.6 million, the after-tax net present value for the development, at a 5% discount rate, comes in at $341 million.