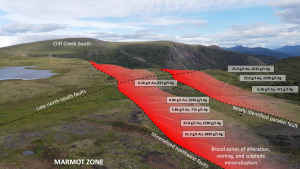 According to the company, in addition to the high-grade rock samples, Benchmark has identified broad zones of alteration and veining with the sulphide mineralization at Marmot. These latest mineralized structures appear geologically similar to the Cliff Creek zone, the largest known zone at Lawyers, which is 3 km northwest of Marmot.

Williamson added that the company continues with its target development work, alongside a 100,000-metre resource definition and stepout drilling program, which was recently expanded from 50,000 metres, following a $48.1-million private placement.

Benchmark has also recently completed a ground magnetic survey over the Marmot area, which outlined northwest and north-northeast-trending fault systems, similar to those found at other mineralized zones within the Lawyers project. Follow-up mapping has defined alteration zones, host to breccias and quartz veins with sulphides, within the new fault structures.

The company’s geological team has planned follow-up drill holes for the new zone.

Benchmark is part of the Metals Group of companies.