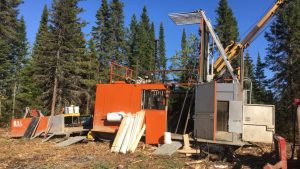 The most recent exploration results from Probe Metals’ 2020 drill program at its Val-d’Or East property hit near-surface gold mineralization around existing resources and discovered new gold zones around the Pascalis trend. The company has released assay results for 36 holes completed in the Pascalis area.

This drilling led to the discovery of two new gold zones – one southeast of the New Beliveau deposit, and the other 300 metres north of the North Zone deposit.

Drilling around existing resources, 600 metres to the south of the historic New Beliveau mine, hit 11 metres of 1.7 g/t gold from 164 metres.

In a release, David Palmer, the company’s president and CEO, noted that this year’s drill program is aimed at tracing new zones of gold mineralization, by following the known gold systems.

“We have been very successful this year with numerous new zones being discovered surrounding our gold resources at Pascalis, Courvan Monique and on the Cadillac Break East property. The main takeaway from our 2020 program is that we still have a tremendous amount of exploration upside and discovery potential on the property.”

Palmer added that, as the company prepares to deliver a resource update for the project next year, the recent gold discoveries should provide Probe with a pipeline of drill targets.

With four drills working on Pascalis, and 14,000 metres still to be completed by year-end, all of the results from this year will be incorporated into the first-quarter resource update.

The geology and geometry of the new zones appears to be similar to that of those already along the Pascalis trend.

In a note to investors, Andrew Mikitchook of BMO Capital Markets wrote that: “Probe continues to demonstrate the success of its exploration and use of modern geophysics to identify new gold zones on its property portfolio.” With these most recent results, the analyst sees potential for “further resource growth ahead of the Q1/21 resource estimate update.” Mikitchook has an ‘outperform’ rating and a $2.5 target price on the stock.

Allan has a ‘buy’ rating and $5 price target for the company.

These resources include both pit-constrained and underground components, and are contained within three deposits along the Pascalis trend, five along Courvan, and also include resources at Lapaska and Monique.