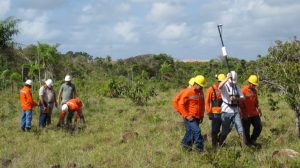 Solaris Resources has reported assay results for the second and third drill holes completed as part of a 40,000-metre drill program at its Warinzta project in southeastern Ecuador. The program is the first drill campaign in 20 years at the 268-sq.-km project.

“The third hole stepped out over 400 metres to the east of the first drilling location within Warintza Central and provided further evidence of the depth extent of the system, which still remains open,” Jorge Fierro, the company’s VP of exploration, said in a release.

The company’s geological interpretation of the system at Warintza suggests that the mineralization drilled to date is from the outer halo of a porphyry system, with future drilling expected to vector toward the higher-grade core.

“Warintza Central continues to demonstrate the potential to become a large, high-grade open pit copper porphyry deposit, which is a rarity in the modern context of the industry,” added Richard Warke, Solaris’ executive chairman.

Warke also added that drilling has only been completed at Warintza Central thus far. The 5-km long trend at the property also includes the Warintza East, West and South areas – all of which have a roughly equal footprint, with higher-grade soil and chip samples previously collected at the West and South zones.

The Warintza Central area features an existing pit-optimized inferred mineral resource of 124 million tonnes grading 0.56% copper, 0.03% molybdenum and 0.1 g/t gold (0.7% copper-equivalent), which is based on less than 7,000 metres of historic drilling. This resource is based on a 0.2% copper cut-off and remains open for expansion.

Solaris is part of the Canada-based Augusta Group, which is focused on the mining sector and co-founded Equinox Gold.