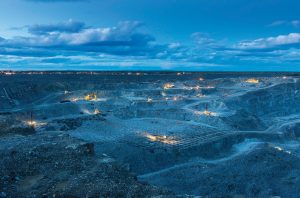 As the price of gold reaches new record highs, investor interest in the operations and companies that actually mine the yellow metal is ramping up. In response, we’ve compiled a list of Canada’s top 10 producing gold mines, based on figures from 2019.

Between them, the mines on the list – which are limited to operations whose main commodity is gold – were responsible for more than 3.5 million oz. of gold production last year.

With a mine life that currently extends to 2027, the partners are keen to keep a good thing going through exploration and have budgeted a total of $24 million this year for 107,000 metres of drilling.

They also began construction on the Odyssey underground ramp, expected to take two years, in August. Watch for an exploration update on Canadian Malartic Underground in the third quarter, followed by a preliminary economic assessment (PEA) next year.

Kirkland Lake Gold’s $4.9-billion takeover of Detour Gold was finalized in late January, making the company the owner of Canada’s second-largest gold mine.

Kirkland Lake has begun a 250,000-metre exploration program at Detour Lake, focused on updating and expanding reserves and the mine plan.

With proven and probable reserves of 15.7 million tonnes averaging 8.4 g/t gold for 4.2 million oz. gold, the current mine life is 13 years.

Agnico Eagle Mines’ flagship LaRonde mine, located mid-way between Rouyn-Noranda and Val-d’Or, Que., produced 343,154 oz. of gold last year at a cash operating cost of US$464 per oz. (on a byproduct basis).

As mining goes deeper, the risk of more frequent and larger seismic events increases. To reduce the risk to workers, Agnico has deployed an LTE communication network at the operation to facilitate the adoption of automated technologies.

LaRonde currently has a mine life of nine years, with proven and probable reserves of 14.9 million tonnes grading 6.02 g/t gold for 2.9 million oz. of gold.

From the time that Newmont became its official owner on Apr. 18, 2019, when its acquisition of Goldcorp closed, until the end of 2019, the Éléonore mine in the James Bay region of Quebec produced 246,000 oz. of gold. Newmont couldn’t provide CMJ production figures for the first quarter, so we don’t have an exact number for the full year. But based on their figures, and accounting for a more than one-month COVID-19-related suspension that began in late March, our best guess is that the mine produced around 328,000 oz. of gold last year.

Newmont’s Porcupine operations consist of the Hollinger open pit, Hoyle Pond underground operations, and a mill in Timmins, Ont., as well as the Borden underground mine near Chapleau, which reached commercial production last fall.

Like Éléonore, Porcupine was added to Newmont’s portfolio with the acquisition of Goldcorp, so we don’t have an exact production figure. The operation produced 223,000 oz. gold from Apr. 18 to the end of 2019, and unlike Éléonore, mine operations have not been significantly interrupted by the COVID-19 pandemic, so we estimate 2019 production at approximately 309,000 oz. of gold.

In February, the company released a new mine plan to lower costs and deliver free cash flow beginning in the fourth quarter. The plan reduces the mine life by three years to end in 2028 and cuts reserves by 1.5 million oz. gold, but boosts profitability based on a US$1,275 per oz. reserve price.

Located in Kirkland Lake, Ont., the historic underground mine is one of the highest grade gold mines in the world.

The current mine life at Macassa is nine years, with proven and probable reserves pegged at 3.9 million tonnes grading 21.9 g/t gold for 2.3 million oz. The mill currently has a capacity of 2,200 t/d.

Hemlo, an open pit and underground operation with a 10,000 t/d mill, has produced more than 21 million oz. of gold over more than three decades of continuous operations.

The last mine on our list is also the newest operation, with commercial production beginning in May 2019. Agnico Eagle Mines’ Meliadine mine, 25 km north of Rankin Inlet in Nunavut, produced 191,113 oz. of gold in 2019 at cash costs of US$748 per oz.

The mine, which had been forecast to produce 350,000 oz. gold this year before the pandemic hit, saw reduced mining activities between late March and early June due to COVID-19.

Mining activities returned to normal levels in June, with a mill expansion to 4,600 t/d from 3,750 t/d scheduled to be completed by the fourth quarter. For the first six months of the year, Meliadine produced 129,350 oz. of gold at total cash costs of US$915 per oz.

The underground and open pit operation has a mine life of 12 years, with proven and probable reserves (open pit and underground) of 20.7 million tonnes at an average grade of 6.1 g/t gold for 4 million oz.