Advance United Holdings (CSE: AUHI), which focuses on acquiring undervalued gold properties and increasing their value through the application of modern technology, […]
By Jackson Chen July 26, 2022 At 2:12 pm 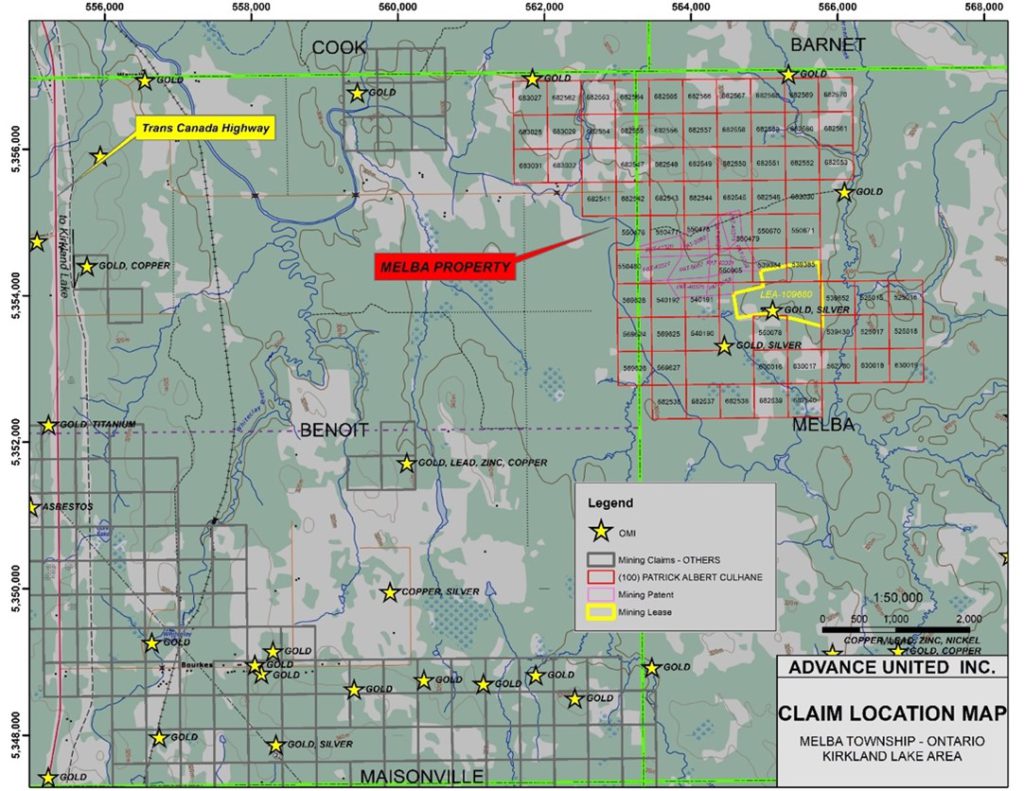 Advance United Holdings (CSE: AUHI), which focuses on acquiring undervalued gold properties and increasing their value through the application of modern technology, has added two properties in Ontario's Kirkland Lake area to its portfolio.

The properties are situated next to each other in the township of Melba, Ont., within the the Abitibi greenstone belt. The Melba mine includes historic reports indicating that there are gold resources of approximately 11,800 oz. underground. The former ore dump remains on surface, as no ore was processed or removed from the site.

Gold was first discovered on the property in 1934, and the Melba mine began development in 1936 but was shut down shortly thereafter with the declaration of World War II.

In 1936, Melba Gold Mines Ltd. began production and completed a 75-metre inclined shaft and about 275 metres of lateral drift work. Over the years, from 1939 to 1988, numerous companies worked the property mapping and grab/bulk sampling and performing ground and airborne geophysics. The property also experienced significant drilling and a compilation of this work indicates significant gold mineralization remains in the old workings.

On June 1, 2020, the claim lease patents were published for public staking as no work or lease payments were current and included the mine workings, which are in good standing until 2036.

To date, four gold-bearing quartz-calcite veins have been identified and trenched on the property. These include the Rolling, Mike, Blue and Contact veins.

The mineralization at the Melba property is open on strike and to depth, and there are excellent historic work records for additional compilation. The Blue vein appears to be the most important and the historic underground work was apparently concentrated there.

Further sampling of drill holes by Pitchvein Mines returned values ranging up to 120 g/t over narrow width. Samples from the underground workings returned assays as high as 128 g/t. Assays returned from the Blue vein values as high as 15.3 g/t gold over 1.1 metres for a length of 52 metres.

Jim Atkinson, CEO of Advance United, stated: "The Melba project represents an excellent example of the application of our strategy. This is a former producing gold mine with historical resources and a large amount of data where we believe modern technological advances can be applied to enhance the resource. It is situated in the highly productive and prospective Abitibi greenstone belt of Ontario, which has produced over 70 million ounces of gold and is on strike from the former producing Ross mine and the currently producing Black Fox mine."

The company is currently preparing for a field program, which will begin immediately and includes prospecting, geological mapping and a very low frequency electromagnetic (VLF-EM) survey, followed by drilling.

The principal asset under Advance United’s portfolio is the Doyle property, which is in the exploration stage. The Doyle project consists of 109 mining claim cells and covers an area of approximately 3,265 ha located approximately 92 km southwest of Wawa, Ont., and 86 km north of Sault Ste. Marie, Ont.