CAMBRIDGE, Ont. – After three-quarters of a century in the business of providing top industrial air quality solutions across North America, N.R. […]
By Marilyn Scales November 27, 2018 At 4:26 pm 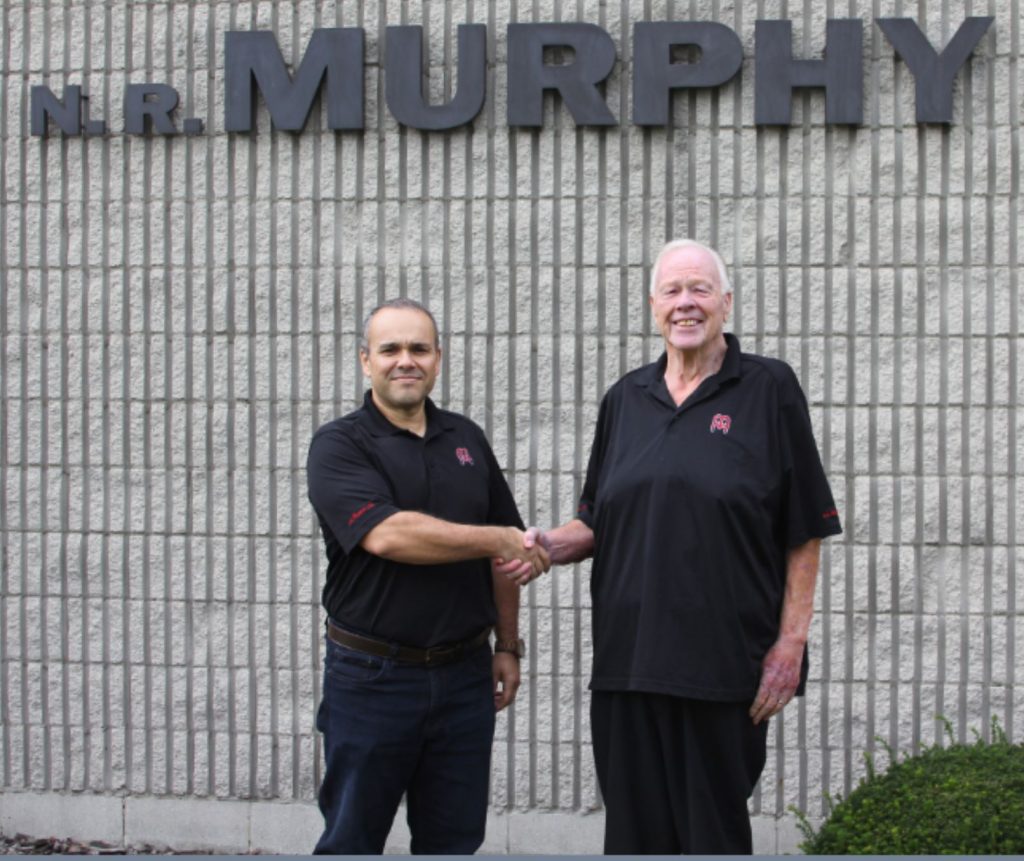 After 75 years in business, Norman R. Murphy (right) couldn’t be happier to “pass the torch” along to his son-in-law (left) Helder Armas. After 75 years in business, Norman R. Murphy (right) couldn’t be happier to “pass the torch” along to his son-in-law (left) Helder Armas.[/caption] CAMBRIDGE, Ont. – After three-quarters of a century in the business of providing top industrial air quality solutions across North America, N.R. Murphy Limited has passed the torch to new owners. The Cambridge-based company – which manufactures dust collectors, fans, and similar equipment for workplaces in many sectors – is pleased to announce that former sales manager Helder Armas has taken over the reins as the new president. Helder Armas is also now a co-owner with his wife, Lori Armas, who is the daughter of Norman R. Murphy, the company’s previous owner and its namesake. “It is an honour to take over a business that has a highly esteemed reputation for dedicated customer service and uncompromising quality,” Helder Armas said. “This is a legacy that I plan to carry on.” The company expects a smooth transition into the new ownership, as it continues to use the same management team, systems, and facility. This transition comes as N.R. Murphy observes a special anniversary – marking 75 years of building some of the top dust collectors in the North American market. The company has installed well over 14,000 dust collection systems throughout the country. Technology may change, but the Murphy family has always remained consistent in its strong dedication to one goal – quality. This quality story goes back to 1943, when William Murphy managed, then later purchased Preston Price Air Conditioning, a company that also shared Murphy’s high quality standards. In 1948, he renamed the company Murphy Sheet Metal and switched the focus to supplying and installing dust collection equipment. As the firm continued to grow and expand its customer base, Robert Murphy took it over in 1956, and his son, Norman R. Murphy, became vice-president. In 1966, Norm Murphy bought the company from his father, and it became N.R. Murphy. This transition began a successful 52-year era during which the company focused primarily on producing dust collectors. In 1972, N. R. Murphy Limited partnered with Rodgers Machinery, an American company, and formed Murphy-Rodgers in Los Angeles. Murphy-Rodgers manufactured products based on N.R. Murphy’s designs and concepts for the U.S. market, and N.R. Murphy Ltd. manufactured dust collection products for the Canadian and export markets. The partnership lasted until the closure of Murphy-Rodgers in 2010, yet N.R. Murphy has kept its American customer base. With Helder and Lori Armas succeeding Norman Murphy, the company has entered the latest of many transitions over its 75-year history. But N.R. Murphy’s equipment has continued to stand the test of time. The firm’s long time commitment to top quality is evident in the fact that its biggest competitor is its own used equipment. Visit www.NRMurphyLtd.com to find a top quality dust collection system.