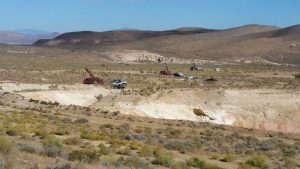 The most recent drilling at Corvus Gold’s Mother Lode property in Nevada targeted three vertically related zones at the 36.5-sq.-km property. Data from the eight holes reported continues to define a near-surface body of mineralization at the Upper Oxide zone, infill the Central Main zone sulphide resource with higher-grade intercepts and outline a broad zone of mineralization at the Central Intrusive zone (CIZ), which was discovered in January.

Drill highlights from the Upper Oxide zone include 39.9 metres of 0.68 g/t gold from 134.9 metres; and 13.6 metres of 1.03 g/t gold starting at 128 metres. According to the release, these additional intercepts are “defining a sizeable body of low-grade heap leach mineralization that will be beneficial to mining of the deeper, higher-grade deposit at Mother Lode,” by lowering the strip ratio.

Notable intercepts from the Central Main zone sulphide unit include 44.9 metres of 1.67 g/t gold from 366.4 metres; 43.8 metres of 2.6 g/t gold starting at 232.9 metres; and 73.2 metres of 1.92 g/t gold from 115.8 metres. These results have infilled the resource model with higher-grade hits, which is expected to “improve the grade and size of the mineral resource as well as its confidence level.”

At the Central Main zone, the drilling has also returned breccia zones from areas at the top of the CIZ structures, which cut the Central Main area and feature higher-grade gold areas – these “are a good sign of a dynamic and large gold system.”

Drill intercepts from the CIZ include 51.1 metres of 0.66 g/t gold starting at 524.9 metres; and 29 metres of 1.67 g/t gold from 243.8 metres. The latest results suggest a broad zone of gold mineralization, with variable widths, which remains open at depth. The mineralization is mostly oxides down to a depth of 600 metres, with initial cyanide leach results suggesting gold recoveries of over 90%, which Corvus believes suggests good potential for heap leach gold extraction.

An additional hole completed towards the north end of the projected CIZ hit high-grade silver, retuning up to 46 g/t of the precious metal. Corvus views this as a potential indication of a “hotter, potentially more productive part of the system.”

Ongoing drilling at the CIZ is aimed at outlining the higher-grade shoots within this area; additional metallurgical testing is also underway to understand potential processing pathways as part of a Mother Lode mine plan.

In the release, Jeffery Pontius, Corvus Gold’s president and CEO, highlighted the growth of the existing deposit and CIZ target.

“These new results continue to support the expansion of the Mother Lode deposit and the new CIZ target. The upgrading of the Main zone with core drilling is intriguing. We believe that these results could lead to an increase in the estimated grade for a future mineral resource estimate.”

Pontius also added that although the majority of the CIZ drill results will not be part of an upcoming preliminary economic assessment on Mother Lode (expected later this year), these assays will be accounted for in an a resource update for Mother Lode in the new year, as will discovery drill results from the Lynnda Strip.

The company also holds the 91-sq.-km North Bullfrog project, which borders Mother Lode; both are located within the Bullfrog mining district host to epithermal gold systems. Mother Lode is a sediment-hosted gold system.