TORONTO – Justin Trudeau, Canada’s prime minister, has announced the extension of an accelerated tax-write off to include a number of electric […]
By Magda Gardner March 3, 2020 At 1:10 pm 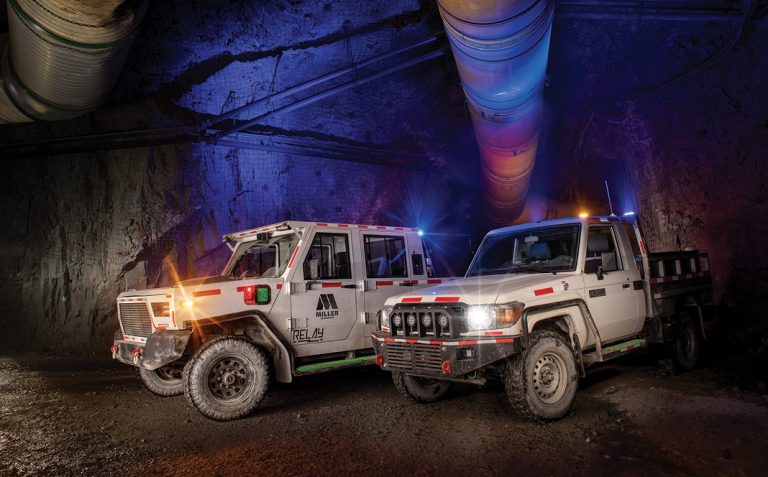 Relay electric vehicle (left) Credit: Miller Technology[/caption] TORONTO – Justin Trudeau, Canada’s prime minister, has announced the extension of an accelerated tax-write off to include a number of electric mine vehicles. The write-off will allow companies to expense the full cost of the equipment the year that it is put in use. Although the government first introduced the ability to immediately expense the cost of clean energy equipment in its 2018 Fall Economic Statement, this did not include most of the electric vehicles used at mines. The Mining Association of Canada (MAC) expressed support for the accelerated tax shield, “this announcement is welcome news for Canada’s mining sector and responds to one of MAC’s specific budget requests,” Pierre Gratton, MAC’s president and CEO, said in a release. “Last year, Canada opened its first all-electric mine, and the deployment of electric vehicles across Canada is accelerating. Nonetheless, such equipment has a significant cost premium, so today’s announcement will help de-risk such purchases and accelerate the adoption of electric vehicles at more mines.” Benefits of electric vehicles at underground mines include lower ventilation requirements, less mine waste due to smaller excavations and lower greenhouse gas emissions. “Just as miners know their materials are essential to the transition to a low-carbon economy, we also know we must reduce our own operational footprint,” Brendan Marshall, MAC’s VP of economic and northern affairs added. “This announcement underscores the government recognizes this and is committed to a sustainable extractive sector as a key component of Canada’s economy.” According to the MAC release, Canadian mines supply some of the world’s lowest carbon-intensive nickel, copper and metallurgical coal. For more information, visit www.Mining.ca.