NEWFOUNDLAND – Anaconda Mining of Toronto has begun an infill percussion drill program at its Argyle gold discovery about 4.5 km from […]
By Marilyn Scales September 21, 2017 At 4:24 pm 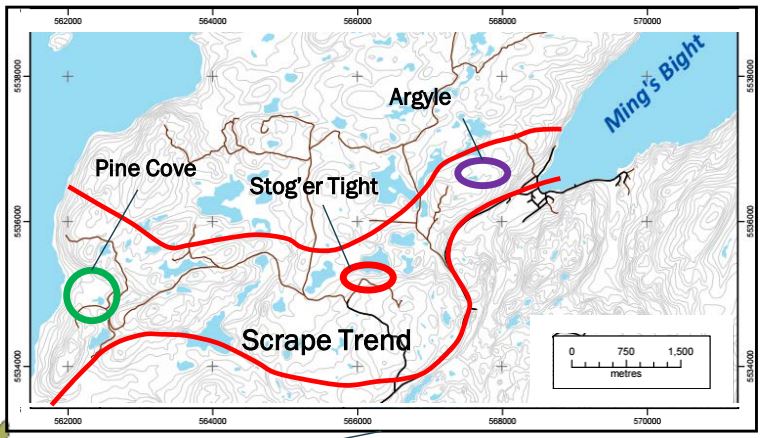 Map of Anaconda’s Point Russe project showing how discoveries are moving eastward. (Credits: Anaconda Mining)[/caption] NEWFOUNDLAND – Anaconda Mining of Toronto has begun an infill percussion drill program at its Argyle gold discovery about 4.5 km from its Pine Cove mill and tailings facility at the Point Rousse project. The company plans to drill about 500 metres in 25 holes to demonstrate continuity of near surface mineralization. A 43-101 resource estimate is expected by the end of 2017. After trenching and diamond drilling in 2016, the company said Argyle is a shallow dipping, near surface system with a strike length of over 600 metres and a down-dip extension of at least 225 metres. Drill cores assayed 2.09 g/t gold over 14.0 metres, 4.50 g/t over 6.4 metres, and 1.32 g/t over 12.0 metres. The deepest of these intercepts ended only 32 metres below surface. Anaconda is still mining the Pine Cove deposit, but is accelerating the work so that the pit can be used for tailings containment beginning early next year. The Stog’er Tight deposit will then be mined. This deposit contains an indicated resource of 204,100 tonnes grading 3.59 g/t gold and an inferred resource of 252,100 tonnes grading 3.27 g/t gold (0.8 g/t cut-off). President and CEO Dustin Angelo said in a release, “With the Pine Cove mill and the recently permitted in-pit tailings storage facility, Argyle and any other discoveries around Point Rousse will benefit from the existing infrastructure." Read about Anaconda Mining at www.AnacondaMining.com.