YUKON – ATAC Resources announced that work has started on an updated resource estimate and preliminary economic assessment for the Tiger deposit […]
By Magda Gardner November 14, 2019 At 4:26 pm 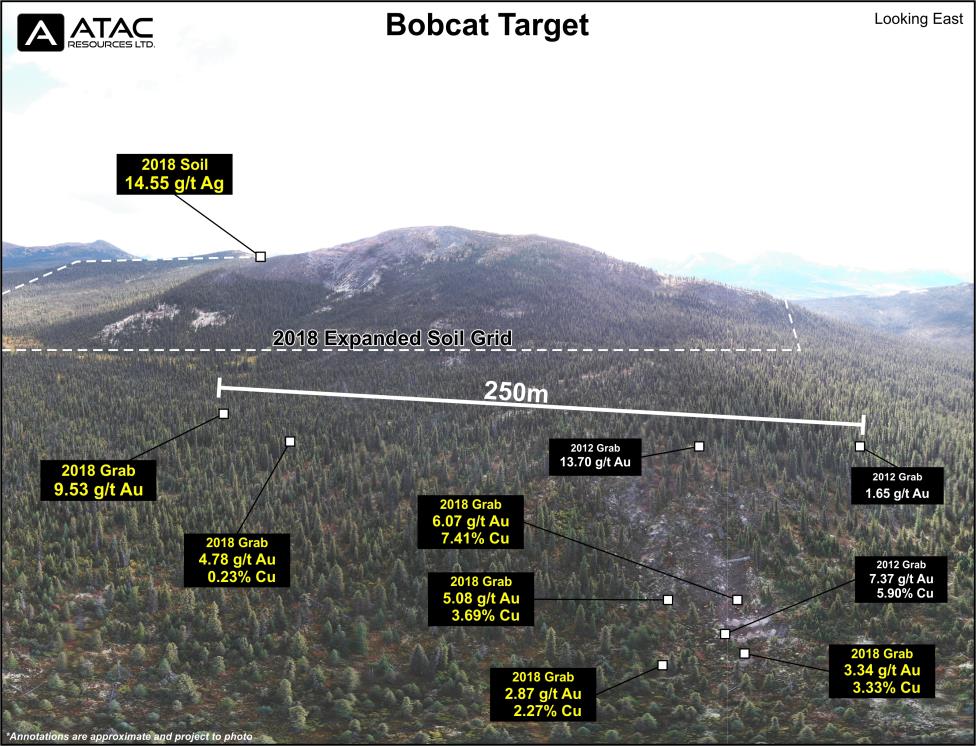 Bobcat Target at Rau Credit: ATAC Resources[/caption] YUKON – ATAC Resources announced that work has started on an updated resource estimate and preliminary economic assessment for the Tiger deposit located at the Rau project within the 170,000 hectare Rackla gold property in the Yukon. The updates will incorporate the results of drilling completed in 2017 and 2019, updated metallurgical test work on the upper part of the sulphide unit and a new geologic model. Drilling completed on the Tiger deposit in 2019 was focused on testing near-surface oxides identified outside of the area of the main deposit. Drilling also intersected oxide mineralization within the 2016 PEA pit areas that were thought to contain waste material. Surface sampling indicates the presence of oxide zones further outside of current resource and pit shell areas. The Tiger deposit, with current measured and indicated resources of 5.68 million tonnes grading 2.66 g/t gold for a total of 485,700 oz. and inferred resources of 3.23 million tonnes at 1.8 1g/t for 188,500 oz. was evaluated in a 2016 PEA as an open pit operation with a carbon in pulp recovery process. Pre-production capital was estimated at $109.4 million with average annual gold production of 50,000 oz. Tiger mineralization is comprised of oxide gold, fracture hosted native gold and gold-bearing arsenopyrite. Based on the 2015 resource estimate, oxide resources at Tiger total 409,100 oz. The company also completed eight diamond drill holes to test geophysical anomalies 4 km to the east of Tiger. While the drilling returned intercepts grading on the order of 0.2 g/t to 0.3 g/t gold, ATAC believes that based on the intensity of the anomaly, there remains potential for additional mineralization at depth. ATAC is working on development of the 185 km Rackla belt. Rackla is comprised of the Rau, Orion and Osiris projects where Rau is considered an intrusion related polymetallic district and Orion and Osiris are classified as Carlin type districts. For more information, visit www.ATACResources.com.