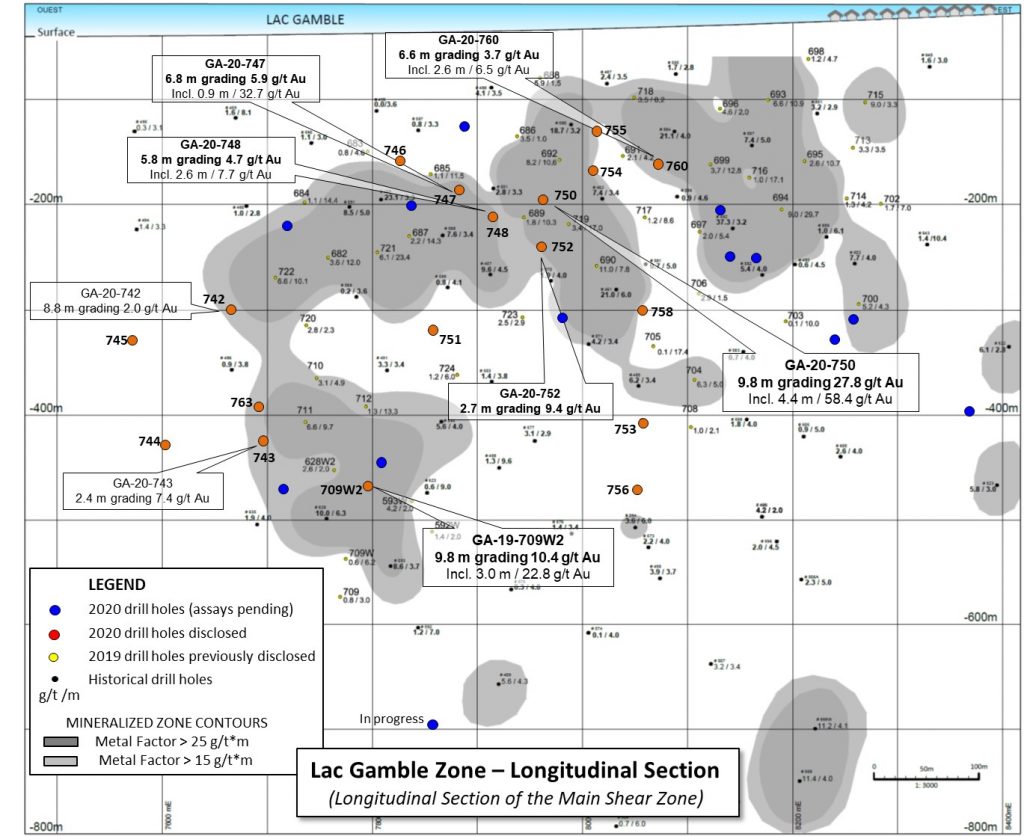 Drill results from the Lac Gamble zone at the Rouyn gold project in Quebec. Credit: Iamgold Drill results from the Lac Gamble zone at the Rouyn gold project in Quebec. Credit: Iamgold[/caption] QUEBEC – Iamgold has reported results from its 2020 drill program at the Rouyn project, near Rouyn-Noranda, including a 9.8-metre interval of 27.8 g/t gold starting at 195 metres downhole. The star intercept, which was drilled in the Lac Gamble zone, included a shorter 4.4-metre section grading 58.4 g/t gold. The true width of the entire interval is 7.25 metres. Iamgold is earning up to a 100% interest in the project, located 45 km southwest of its Westwood mine, from junior Yorbeau Resources. In all, Iamgold released results from 20 holes totalling 6,298 metres drilled at the Lac Gamble zone and 18 holes drilled totalling 6,585 metres at the Astoria area, 2 km west. Results for another 12 holes totalling 4,062 metres are pending. The company had to suspend the 2020 drill program before it was completed due to COVID-19 restrictions imposed by the province. Other highlights from the Lac Gamble zone include: 9.8 metres of 10.4 g/t gold from 480 metres downhole and 6.8 metres of 5.9 g/t gold from 198 metres. In the Astoria area, highlights from the Upper zone included 5 metres grading 4.6 g/t gold from 173 metres downhole. The Lower Piché zone of the Astoria area returned 2.2 metres grading 7.9 g/t gold starting at 371 metres and 9 metres of 5.8 g/t gold at 585 metres depth. Iamgold is completing a systematic infill drill program at the Lac Gamble zone to support an initial resource estimate, and drilling to test lateral expansions. Drilling in the Astoria area is meant to test exploration targets and evaluate the continuity of mineralization. "We continue to be pleased with the positive results obtained from our infill and evaluation drilling programs, especially those from our priority target at Lac Gamble which we are working to advance to a formal resource estimate,” said Craig MacDougall, senior vice-president, exploration for Iamgold, in a release. “The Rouyn gold project provides Iamgold with an opportunity to delineate satellite resources with the objective of supplementing production at our Westwood operation and utilizing our existing infrastructure and excess mill capacity." With restrictions on mineral exploration in Quebec lifted earlier this month, MacDougall said that Iamgold is assessing a resumption of field work. Iamgold is in the second year of a four-year option agreement on Rouyn, which would see it spend $9 million on exploration and make payments totalling $4 million for a 100% stake in the project. Under the agreement, Iamgold must drill at least 20,000 metres in the first two years, and then complete a resource estimate. The 27-sq.-km property covers a 12-km stretch of the Cadillac-Larder Lake Break and contains four known gold deposits along the 6-km Augmitto-Astoria corridor. The Augmitto and Astoria deposits together contain a global resource of 2.6 million tonnes averaging 5.92 g/t gold for 497,820 oz. Iamgold says the exploration target potential at Lac Gamble, which is located between the Augmitto and Astoria deposits, is interpreted to be between 400,000 and 600,000 oz. of gold at a grade between 7.0 and 8.5 g/t gold. For more information, visit: www.iamgold.com or www.yorbeauresources.com.