VANCOUVER – Private prospect generator Kenorland Minerals has announced a major discovery next to the past-producing Troilus mine in Quebec and plans […]
By Alisha Hiyate July 29, 2020 At 12:36 pm 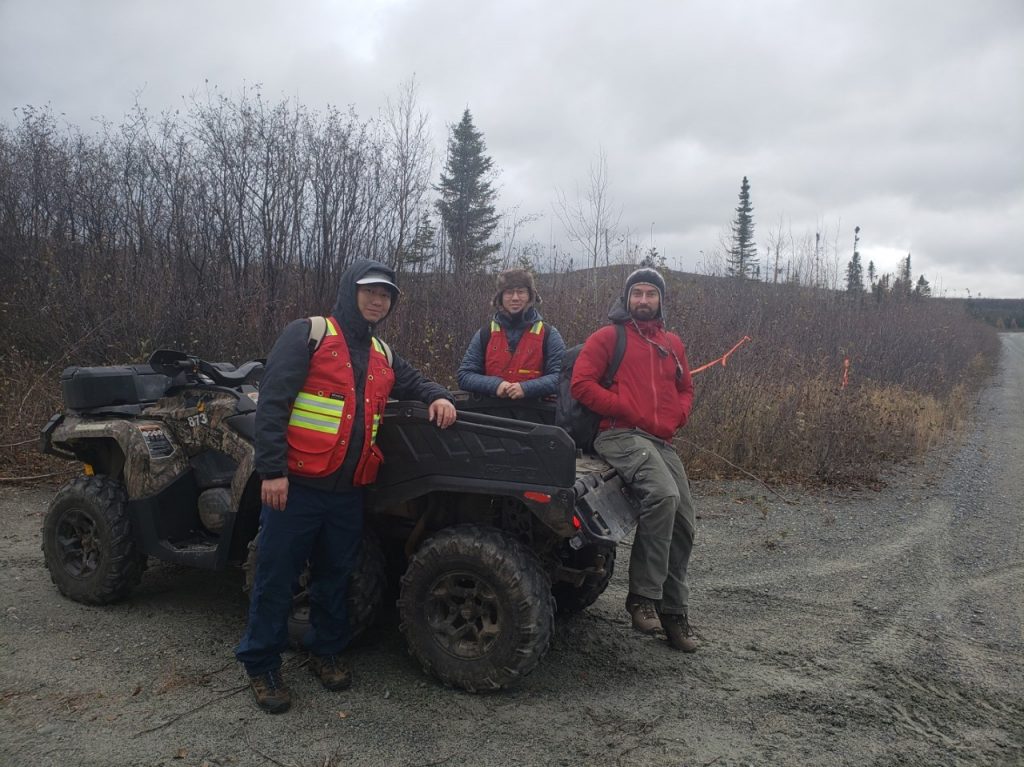 Akito Takeuchi and Sho Aibe of Sumitomo Metal Mining with Francis MacDonald, VP Exploration of Kenorland Minerals at the Frotet project in Quebec. Credit: Kenorland Minerals[/caption] VANCOUVER – Private prospect generator Kenorland Minerals has announced a major discovery next to the past-producing Troilus mine in Quebec and plans to go public via a reverse takeover transaction with Northway Resources. The grassroots discovery at the Frotet project in the Frotet-Evans greenstone belt, 100 km north of Chibougamau, returned highlights of: All holes were drilled at the Regnault target at Frotet, which is located just south of the Troilus gold-copper project being advanced by Troilus Gold. The 378.4-sq.-km project is under option to Sumitomo Metal Mining, which funded the initial 15-hole exploration program and can earn an interest of up to 80% by funding $8.3 million in exploration over four years. “The results from the maiden drill program at Regnault are nothing short of amazing. We have found a new significant gold system just a few kilometres off the Route du Nord in Quebec, completely concealed undercover, through systematic grassroots exploration,” said Zach Flood, president and CEO of Kenorland, in a release. “The results announced are the outcome of a sustained effort over multiple seasons, in collaboration with, and support from, our partners at Sumitomo Metal Mining. The discovery here highlights the potential to make further incredible grassroots discoveries in Quebec and elsewhere, even in areas that have been considered heavily prospected in the past.” Flood says the drill program intersected multiple gold-bearing structures at various orientations over an area of 1.5 km by 500 metres. The company plans to follow up to on this discovery with additional exploration on strike in the months ahead. Kenorland initially staked the project in 2017 and optioned it to Sumitomo in April 2018. Two seasons of grassroots exploration were conducted before this year's maiden drill program. The Regnault discovery is hosted in a multi-phase intrusive complex located along an east-west trending deformation zone. Visible gold can be be seen in quartz veins hosted within altered intrusive rocks, with gold mineralization also associated with broadly disseminated pyrite hosted in in zones of intense alteration along the contacts of the intrusive phases. Reverse takeover Kenorland has also signed a letter of intent with Northway Resources that will see the TSX Venture Exchange-listed junior acquire it. Kenorland owns 14.5% of Northway which has two exploration projects in Alaska and is also led by Flood as president and CEO. The related-party transaction is contingent on both parties entering a definitive agreement before the end of August. Its terms include Northway raising $10 million in a private placement, and the approval by a majority of Northway's shareholders outside of Kenorland. Also in Quebec, Kenorland holds the Chicobi project, which is under option to Sumitomo, and the Chebistuan project, which is under option to Newmont. The company also holds the Tanacross porphyry copper-gold-molybdenum project in Alaska. For more information, visit kenorlandminerals.com or northwayresources.com.