CALIFORNIA – Kore Mining has released the results of a preliminary economic assessment (PEA) for its Imperial deposit, which suggests an open-pit […]
By Magda Gardner April 7, 2020 At 3:41 pm 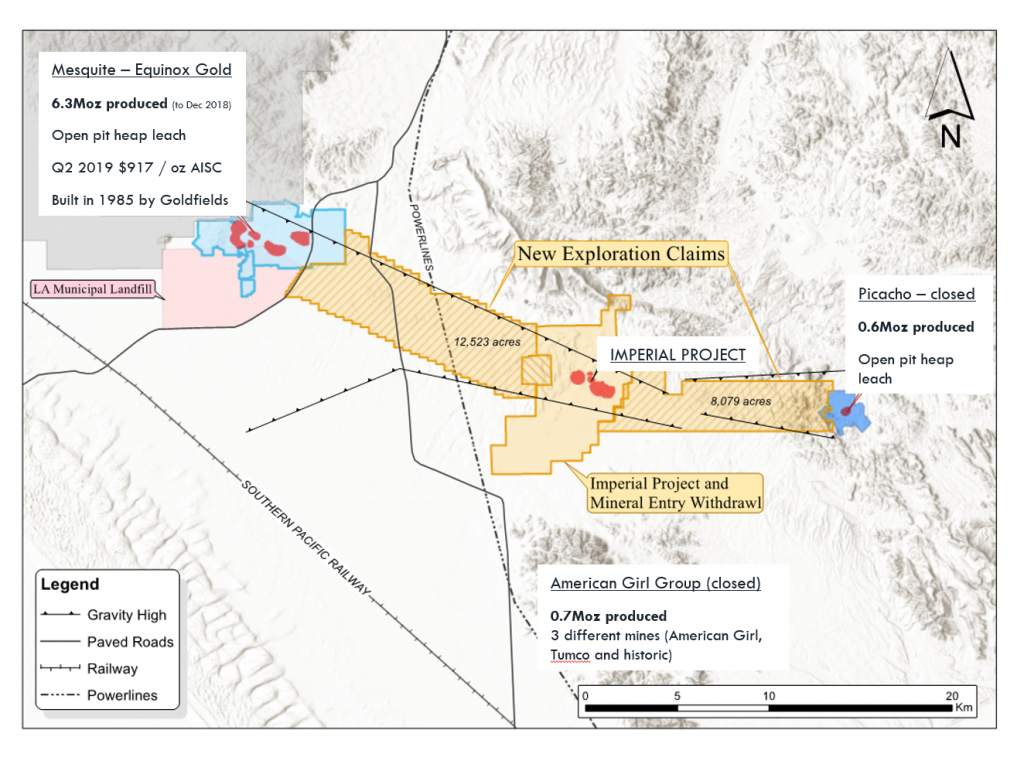 Imperial project site Credit: Kore[/caption] CALIFORNIA – Kore Mining has released the results of a preliminary economic assessment (PEA) for its Imperial deposit, which suggests an open-pit heap leach operation with direct stacking of the run-of-mine oxides onto leach pads. The study forecasts average annual production of 146,000 oz. of gold over an 8-year mine life at all-in sustaining costs of US$852 per oz., with management ultimately choosing to evaluate the lowest pre-production capital scenario. Based on a pre-production capital estimate of US$142 million, the net present value estimate for the project, at a 5% discount rate, stands at $457 million with a 44% internal rate of return. The study used a gold price assumption of US$1,450 per oz. “Kore considered several alternative options at this PEA stage, which have potential to deliver even higher NPVs by utilizing crushing and additional pre-stripping. A strategic decision was made to proceed with a lower pre-production capital plan while still delivering strong economic returns,” Marc Leduc, the company’s COO, said in a release. Leduc added that the mining scenario outlined in the PEA is compliant with California’s reclamation and environmental laws. Kore plans to start the permitting process for the project later this year – the engineering work from the PEA will be used to complete a Plan of Operations document for the Bureau of Land Management. The company anticipates a three-year timeline from submission of the plan for a construction decision. This year, Kore plans to continue with exploration and drilling at Imperial and apply for drill permits for exploration and resource expansion targets. Additional infill work is planned to increase the level of confidence in the existing data. Mineral resources at Imperial are unchanged at 46 million tonnes in the indicated category at 0.59 g/t gold for a total of 900,000 oz. with additional inferred resources of 91 million tonnes at 0.46 g/t gold containing a further 1.3 million oz. The Imperial gold deposit extends over 2.4 km of strike, is up to 750 metres wide and remains open. Kore controls 28 km of the Mesquite-Imperial-Picacho exploration district. A recent geophysical survey has outlined potential sulphide chargeability anomalies along trend. The oxide mineralization remains open on strike and at depth. Imperial County has a history of gold mining with existing infrastructure nearby the Imperial project. For more information, visit www.KoreMining.com.