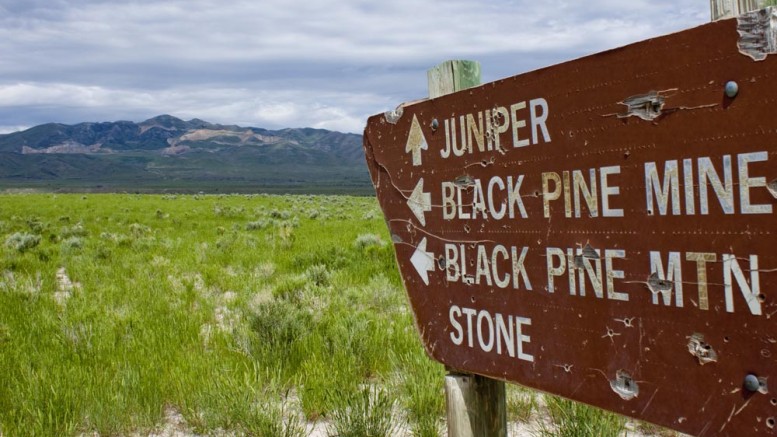 Sign pointing to Black Pine project Credit: Northern Miner staff[/caption] IDAHO – Reverse-circulation drilling at Liberty Gold’s Black Pine project has discovered a third zone of oxide gold mineralization – D-3 - underneath the historic drilling boundary. The new zone is currently defined by three holes: two of these, LBP125 and LBP129 are 450 metres apart and lie on the same section while the third, LBP127 was drilled 215 metres south of this section. Drill highlights from the D-3 zone include 33.5 metres of 1.98 g/t gold, starting at 224 metres, as well as 29 metres of 1.6 g/t gold, starting at 240.8 metres and 30.5 metres of 1.11 g/t gold from 263.7 metres. Drilling along a 400-metre untested corridor between two historic pits at the site has also extended the 1-km-long D-1 area of gold mineralization by 500 metres to the southeast and by 40 metres to the west. Highlights from this work include 29 metres of 0.54 g/t gold starting at 131.1 metres and 18.3 metres of 0.59 g/t gold from 155.4 metres. Drilling around the transition between the D-1 and D-2 zones also returned oxide gold intervals, with intercepts such as 21.3 metres of 1.27 g/t gold from 179.8 metres and 9.1 metres of 1.12 g/t gold starting at 243.8 metres. “The combination of several high-grade oxide gold discoveries in close proximity to each other, and in association with recently released excellent metallurgy, elevates the value of the Black Pine project,” Cal Everett, the company’s president and CEO, said in a release. Everett added that the company has added a third drill to the project; two of the rigs are currently focused on D-3. Liberty has increased its reverse-circulation drilling budget for the current exploration program to 46,000 metres, up from 28,000 metres, and is also planning on additional core drilling later this season. The exploration work is taking place over a 7.3-sq.-km permit and the company is working to expand this area by an additional 4.6 sq. km. Additional metallurgical testing is also underway – earlier this month, Liberty reported results of the first phase of test work on the oxide material. Black Pine is a Carlin-style gold system in the northern Great Basin. The past-producing operation generated 435,000 gold oz. between 1991 and 1998 at a head grade of 0.7 g/t gold from seven pits. Anomalous gold mineralization in soils has been traced at the 49-sq.-km site over 12 sq. km. For more information, visit www.LibertyGold.ca.