GOLD: Maiden resource for Osiris at Rackla is 1.7M oz

YUKON – The maiden inferred resource estimate for the Osiris deposit is almost 1.7 contained million oz. of gold. Osiris is part […]
By Marilyn Scales June 18, 2018 At 4:52 pm 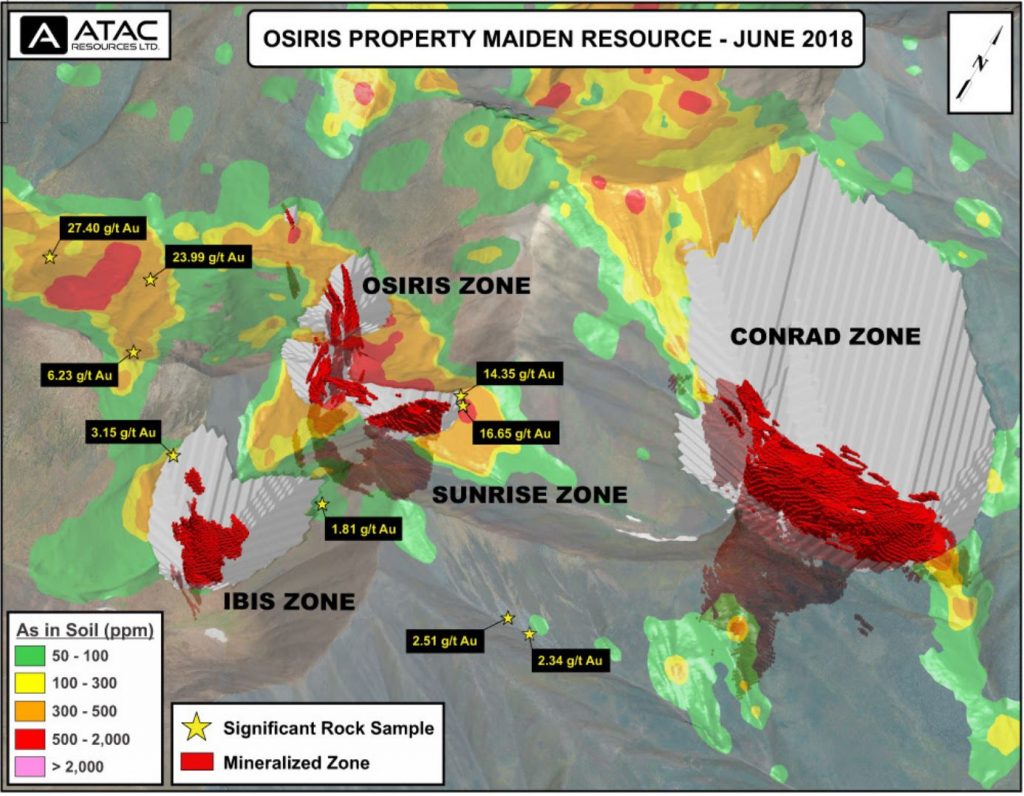 Mineralized zones included in the Osiris maiden resource. (Image: Atac Resources)[/caption] YUKON – The maiden inferred resource estimate for the Osiris deposit is almost 1.7 contained million oz. of gold. Osiris is part of the Rackla gold project owned by Atac Resources of Vancouver, but it is outside the area currently under option to Barrick Gold. The Osiris project  has an inferred resource of 12.4 million tonnes at an average grade of 4.23 g/t gold. Those figures include a pit constrained resource (using a 1.30 g/t cut-off) of 8.0 million tonnes at 4.08 g/t for 1.1 million contained oz. of gold. The balance – 4.3 million tonnes at 4.52 g/t with a 2.60 g/t cut-off – is considered underground constrained. Atac says it spent a “globally competitive” discovery cost of only C$32 per oz. All zones outcrop on the surface and the deposit remains open in multiple directions. A 10,000-metre drill program is underway to increase resources. All four zones – Osiris, Sunrise, Conrad and Ibis – will be tested. The Osiris project is located at the eastern end of the Rackla gold property, the only property in Canada known to contain Carlin type gold deposits previously found solely in Nevada. Enjoy the infographic of the Rackla project at www.AtacResources.com.