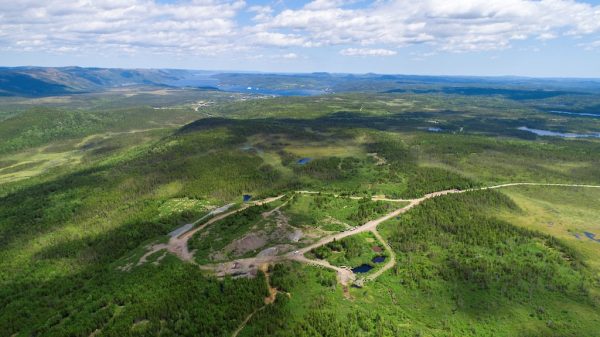 Hammerdown project Credit: Maritime[/caption] NEWFOUNDLAND AND LABRADOR – Infill drilling at Maritime Resources’ Hammerdown gold project has intersected high gold and silver grades within the footprint of the Hammerdown open pit outlined in this year’s preliminary economic assessment (PEA). Drill highlights include 2.5 metres of 22.66 g/t gold and 24.86 g/t silver starting at 39.5 metres, 2.2 metres of 29.58 g/t gold and 12.71 g/t silver starting at 62.1 metres as well as 2 metres of 20.31 g/t gold and 3.19 g/t silver starting at 8 metres. “These latest results lie within the footprint of the PEA open pit, where we see potential to access high grades early in the mine life,” Garett Macdonald, the company’s president and CEO, said in a release. “We are also seeing silver grades up to an ounce per tonne, which is very encouraging as silver has never been assayed before." According to Macdonald, the silver grades represent potential for by-product credits, which could further improve the project’s economics. The 11 holes reported in Maritime’s latest release include grade control and infill holes, drilled on 6-metre sections and down to a depth of 50 metres; some of the holes were extended to intersect additional veins at depth. All of the grade control holes hit gold mineralization at their expected depths with additional gold hits in the surrounding areas. The infill holes continue to return gold assays both within and around the existing inferred resource. With a 10,000-metre drill program underway at Hammerdown, Maritime has also completed two exploration holes, which are now being logged and sampled; additional infill assays are also pending. Maritime Resources wholly owns the Green Bay property, which includes the past-producing Hammerdown gold mine and Orion deposit. The Hammerdown mine produced 143,000 gold oz. from an average head grade of 15.7 g/t gold between 2000 and 2004. Combined measured and indicated open-pit resources at Hammerdown and Orion stand at 1.7 million tonnes grading 6.65 g/t gold for a total of 368,000 oz. Additional inferred resources are at 1.3 million tonnes grading 4.77 g/t gold for 206,200 gold oz. These are at a cut-off grade of 1 g/t gold. Underground resources include 1.2 million measured and indicated tonnes at 4.13 g/t with an additional 1.9 million inferred tonnes grading 4.29 g/t gold. The underground resources are derived using a 2 g/t gold cut-off grade. In February, Maritime published the results of a preliminary economic assessment on open pit and underground mining at the Hammerdown and Orion deposits. The material mined would be pre-concentrated on site and hauled to an offsite mill to produce gold doré. The 9-year mine would produce an average of 57,900 gold oz. annually at all-in sustaining costs of US$939 per oz. With a pre-production capital cost estimate of $57 million, the resulting after-tax net present value estimate for the project, at a 5% discount rate, came in at $142.1 million with a 61.2% internal rate of return. For more information, visit www.MaritimeResourcesCorp.com.