TORONTO – Nighthawk Gold has released results from recent drilling at the Goldcrest sill, part of its Indin Lake property in the […]
By Alisha Hiyate February 19, 2020 At 11:50 am 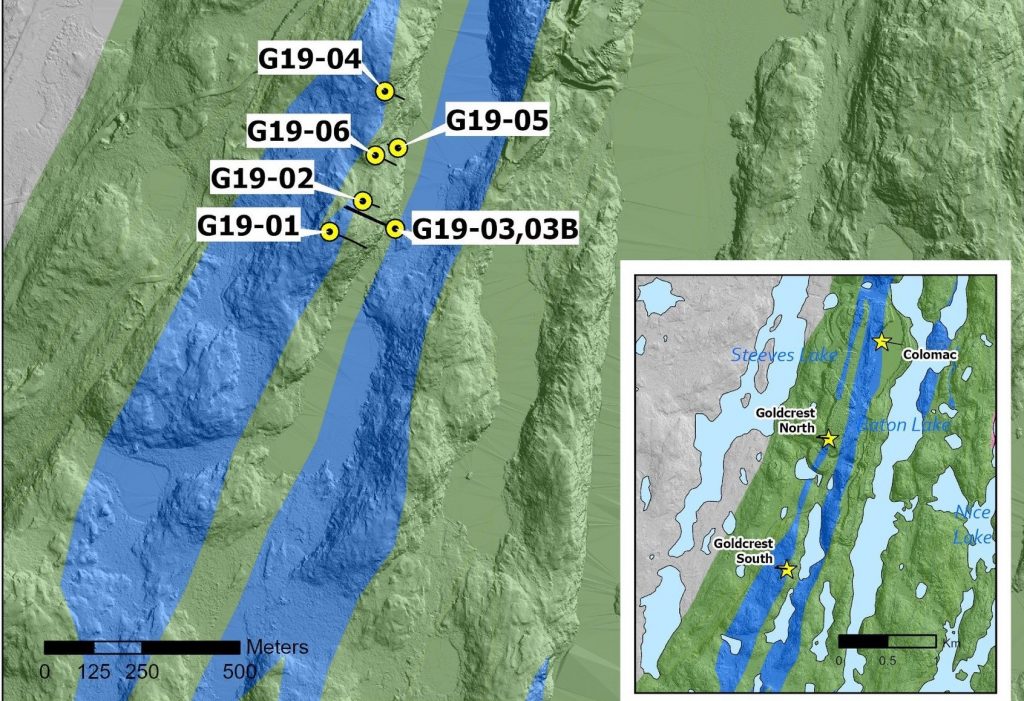 Drillhole locations at the Goldcrest sill, part of the Indin Lake property in the Northwest Territories. Credit: Nighthawk Gold[/caption] TORONTO – Nighthawk Gold has released results from recent drilling at the Goldcrest sill, part of its Indin Lake property in the Northwest Territories that also hosts its flagship Colomac Main project. The company drilled seven holes totalling 2,190 metres to follow up on areas identified during its three previous drill campaigns and to target resource expansion opportunities in the Goldcrest South part of the property. The Goldcrest sill is located 400 metres east of the Colomac Main sill. Highlights include: 68.5 metres (8 metres true width) of 2 g/t gold from 17.5 metres downhole depth, including 15.5 metres of 5.47 g/t gold and 4.3 metres of 16.98 g/t gold in hole C19-05. Hole G19-01 returned intercepts including 13.55 metres of 0.89 g/t gold from 154.2 metres and 10 metres of 1.02 g/t gold from 312.5 metres. "Goldcrest is very similar to Colomac Main except it has been drilled significantly less and has a shorter strike length of 2.5 kilometres compared to the 9-kilometre strike length of Colomac Main,” said Nighthawk president and CEO Michael Byron. “Goldcrest was last drilled in 2017 and several key areas remain unexplored as illustrated by the high-grade intercept in hole C19-05. This hole was drilled within a previously untested section of the sill tracing strong continuity of mineralization to depth. We continue to encounter robust mineralization throughout the Colomac area sills, which reinforces our belief that with continued exploration, new discoveries and ongoing expansion of known zones will follow." All the holes  (most of them steeply drilled) intersected gold mineralization over a strike length of 400 metres at Goldcrest South. The Goldcrest area has seen much less drilling than the Colomac Main area of the property, and Nighthawk believes it has the potential for new discoveries. The Colomac project has an inferred resource of 50.3 million tonnes grading 1.62 g/t gold for 2.6 million oz. The company plans to complete 25,000 metres of drilling at Indin Lake, about 200 km north of Yellowknife, this year. For more information, visit: www.nighthawkgold.com.