QUEBEC – Toronto’s Osisko Mining says it will spend about $100 million on exploration at its Windfall-Lynx deposits as well as the […]
By Marilyn Scales February 8, 2018 At 4:38 pm 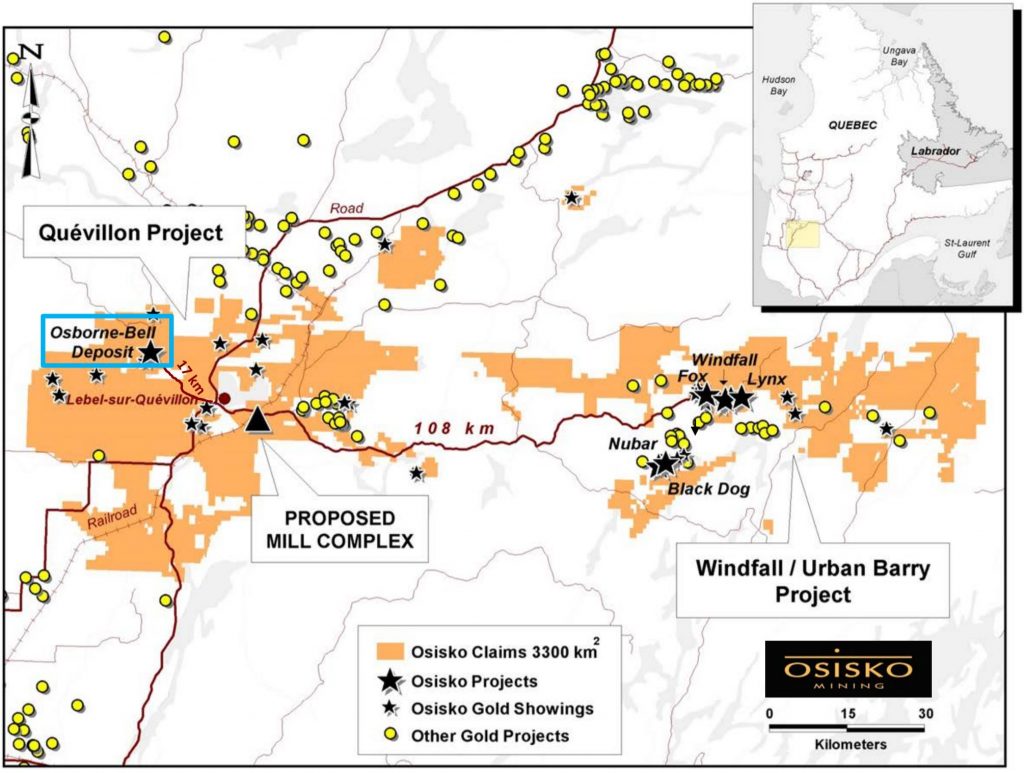 Osisko’s Windfall-Lynx project (right) and its Osborne-Bell deposit (left) will both feed the proposed mill complex in Level-sur-Quevillon. (Image: Osisko Mining)[/caption] QUEBEC – Toronto’s Osisko Mining says it will spend about $100 million on exploration at its Windfall-Lynx deposits as well as the Urban Barry and Quevillon project areas. A wide range of activities are planned. Osisko plans to issue the maiden resource estimate in May for the Windfall-Lynx property, between the towns of Val d’Or and Chibougamau, and a preliminary economic assessment in June this year. Dewatering of the historic Windfall ramp was completed last October, and development of the powder and cap magazines and safety bays is ongoing. Three electrical substations and a water basin for future water treatment have been installed. New development toward the Main zone is advancing at a rate of about 150 metres per month. Zones 27, Caribou and Underdog will be bulk sampled by the end of 2018. Ore from Windfall will be treated in Level-sur-Quevillon, where Osisko is acquiring 500 hectares of property. Part of this landholding includes the former Domtar paper mill site. The company has been drilling the Osborne-Bell deposit with two rigs since December. These results along with a re-evaluated historic drilling results will be used to produce an initial resource estimate for the deposit in early April. The property is about 20 km northwest of Level-sur-Quevillon. Baseline exploration at the Urban Barry block are complete. The results will be used to select as many as 100 targets, some of which will be drilled this year. The Quevillon block, acquired by Osisko in early 2017, is undergoing baseline exploration including airborne geophysics, mapping and sampling. Several exploration targets resulting from this work will be drilled in 2018. More information about these and Osisko’s other exploration initiatives can be found at www.OsiskoMining.com.