BRITISH COLUMBIA – Pretium Resources has released updated resources and reserves for the Valley of the Kings zone at the Brucejack mine […]
By Magda Gardner March 10, 2020 At 5:00 pm 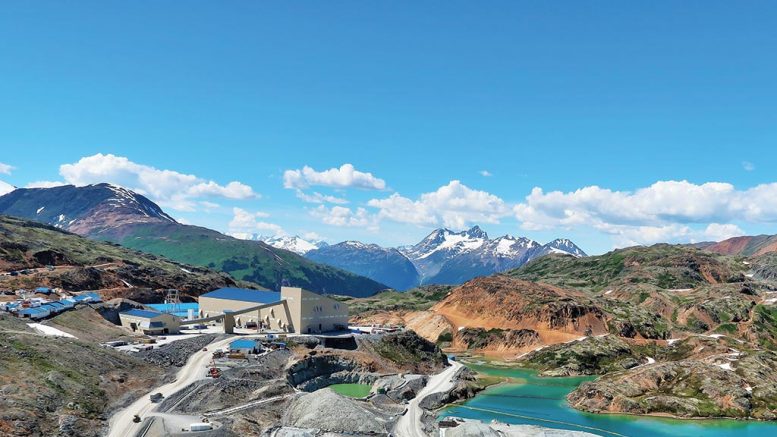 Brucejack gold mine Credit: Pretium[/caption] BRITISH COLUMBIA – Pretium Resources has released updated resources and reserves for the Valley of the Kings zone at the Brucejack mine as well as an updated life of mine plan. Most notable is the 36% drop in the reserve grade for this zone down to 8.8 g/t gold, versus the prior estimate of 13.8 g/t. The resulting mine plan update forecasts life of mine annual gold production averaging 311,000 oz. over a 13-year operating life at all-in sustaining costs of US$743 per oz. The prior mine plan, from April 2019, suggested gold production averaging 441,000 oz. at AISCs of US$539 per oz. Last month, Pretium first announced that it expects to produce 325,000 oz. to 365,000 oz. of gold a year while mining the Valley of the Kings zone at Brucejack. The latest technical report suggests average annual gold production of 367,000 oz. in the first nine years of mining. While expected mill throughputs and recoveries are largely unchanged, the most recent mine plan also incorporates higher labour, environmental compliance and snow removal costs. The updated net present value estimate for the project, at a 5% discount rate, now stands at US$1.5 billion, down 42% from last year’s US$2.6 billion based on unchanged metal prices. The latest resource and reserve numbers incorporate 89,121 metres of infill drilling completed last year with a 3.5 g/t cut-off grade for the Valley of the Kings zone, lowered to more closely resemble recently mined grades. Estimation parameters are now based on production reconciliations and allow greater local accuracy in the grades forecast. In addition, a call factor was applied to a portion of the reserve tonnage to reconcile this material to operating conditions. Resource and reserve numbers for the lower-grade West zone remain unchanged; this area is scheduled for mining in the second half of Brucejack’s operating life. Updated Valley for the Kings reserves now total 12.8 million tonnes at 8.8 g/t gold for a total of 3.6 million oz. with a further 2.9 million tonnes at the West zone grading 6.8 g/t gold adding 600,000 gold oz. The Valley of the Kings reserves are contained within measured and indicated resources of 18.4 million tonnes grading 11.3 g/t gold, totaling 6.7 million oz; previously at 13.7 million tonnes at 17.15 g/t gold. Inferred resources within this zone now stand at 5.4 million tonnes grading 13.3 g/t gold, compared to the 3.8 million tonnes at 17.07 g/t suggested by the report from April 2019. Brucejack has been in commercial production since July 2017. Pretium plans to start a reverse circulation drill program in the second quarter to increase the data density for mine planning and production optimization. For more information, visit www.Pretivm.com.