QUEBEC – QMX Gold has released the results of four infill holes completed in the central part of its Bonnefond deposit, which […]
By Magda Gardner April 8, 2020 At 3:38 pm 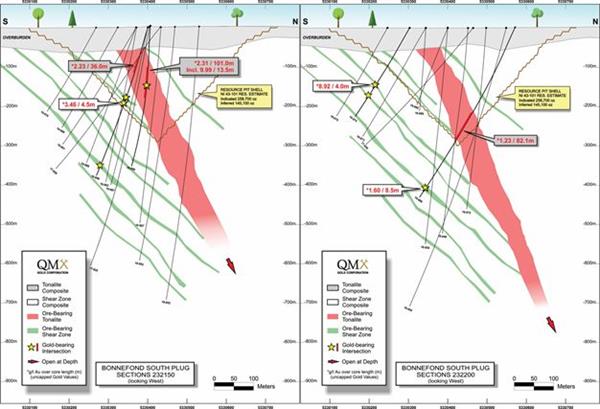 Bonnefond drilling cross-section Credit: QMX[/caption] QUEBEC – QMX Gold has released the results of four infill holes completed in the central part of its Bonnefond deposit, which is within the eastern portion of the company’s 200-sq.-km land package in the Val d’Or region. The drilling returned long gold intercepts from the tonalite intrusive unit with additional higher-grade hits from shear zones in the footwall, to the south of the tonalite. Drill highlights include 101 metres of 2.31 g/t gold and 36 metres of 2.23 g/t gold from the tonalite as well as 4 metres of 8.92 g/t gold and 4.5 metres of 3.46 g/t gold from the underlying shear zones. “Our flagship project has yet again impressed us with excellent grade over several metres,” Andreas Rompel, the company’s VP of exploration, said in a release. “And we will continue to enlarge the area of the Bonnefond resource and subsequently the ounces within the resource. Our endeavour to target the auriferous shears and contacts has been highly successful as a result of our advanced understanding of the structural nature of the mineralization process.” QMX temporarily suspended its field activities in Quebec at the end of March, in line with the provincial government’s guidelines in response to COVID-19. Remote modeling, drill targeting and historical data compilation work is ongoing. Thus far this year, the company has drilled 14,400 metres as part of an infill program for Bonnefond with a further 6,000 metres of exploration drilling planned to the east and west of the deposit. Last year, the company released a maiden resource estimate for Bonnefond, with indicated resources of 4.8 million tonnes at 1.69 g/t gold for 258,700 oz. and additional inferred resources of 2.4 million tonnes at 1.87 g/t gold for 145,100 oz. QMX also holds the permitted Aurbel mill, a 1,200 t/d facility which has been refurbished to 650 t/d. For more information, visit www.QMXGold.ca.