QUEBEC – QMX Gold has announced results of the first three holes completed on the River target on the western side of […]
By Magda Gardner January 30, 2020 At 12:34 pm 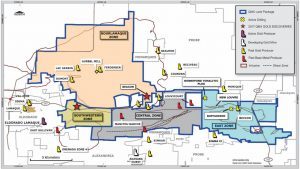 QMX holdings Credit: QMX Gold[/caption] QUEBEC – QMX Gold has announced results of the first three holes completed on the River target on the western side of the company’s project in Val d’Or. Drill highlights include: “We are delighted that we immediately achieved high grade gold intersections in the first three drill holes on our new River target,” Andreas Rompel, the company’s vice president of exploration said in a release. “This gives us great optimism and encouragement to continue with our structural target delineation in general and for the River target in particular, where we anticipate establishing additional resources…” Assays for four additional holes completed are pending. QMX plans to complete additional drilling at River once modelling is completed using the first batch of drill holes. The River target is located approximately 1 km to the west of the historic Lac Herbin-Dumont-Ferderber gold system and was discovered in 2011. In December, Eldorado Gold invested $4 million in QMX, giving it a 19.99% stake in the company; QMX also holds a permitted mill and tailings facility at its Quebec project. A maiden resource for the Bonnefond deposit in the eastern portion of the property was released in July: indicated resources currently stand at 4.8 million tonnes grading 1.69 g/t gold for a total of 258,700 oz. with additional inferred resources of 2.4 million tonnes at 1.87 g/t gold for 145,100 oz. Additional targets have been identified for follow-up within the 200-sq.-km project. QMX started drilling at the site in 2017. For more information, visit www.QMXGold.ca.