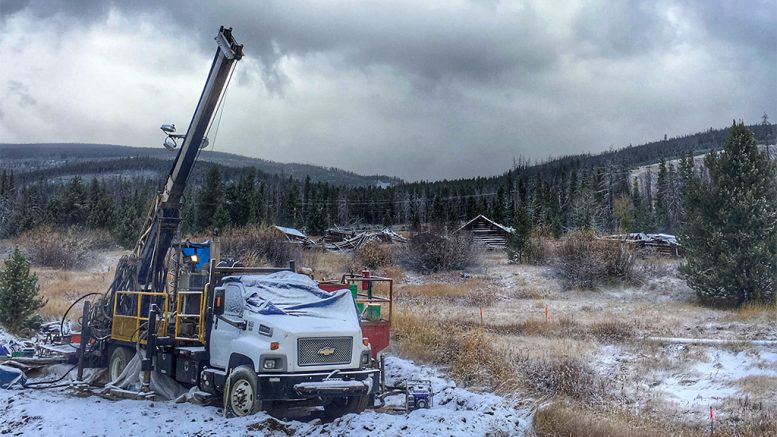 Drill at Beartrack gold project Credit: Revival[/caption] TORONTO – Revival Gold has announced a $13 million (upsized from $10 million) bought-deal financing, led by BMO Capital Markets as the sole underwriter. The offering includes 11.9 million units, sold at $1.1 each, raising $13 million. Each unit includes one share plus half of a warrant. The underwriter also has the option, for 30 days following closing, to purchase up to an additional 15% of the securities offered to cover over-allotments. Closing is expected around Aug. 6. The proceeds are intended for ongoing exploration and development work at the company’s Beartrack-Arnett gold project in Idaho, as well as for general corporate purposes. In February, Revival published an updated resource for Beartrack-Arnett, with inferred resources of 47.2 million tonnes grading 1.08 g/t gold for a total of 1.6 million oz. Indicated resources total 36.4 million tonnes grading 1.16 g/t gold for a total of 1.4 million oz. These figures include both heap leach and sulphide material as well as open-pit and underground components and were derived using cut-off grades between 0.17 g/t gold and 1.3 g/t gold. The Beartrack site produced 609,141 oz. of gold in the 1990s from heap leach operations. Revival is working towards a restart of heap leaching and milling at the project – a preliminary economic assessment is underway. In 2017, Revival entered into an agreement with Yamana Gold to acquire a 100% interest in the Beartrack project, by paying US$250,000 and issuing 1 million shares upon closing. The company also needs to spend US$10 million on exploration at the site by 2022 and make a resource or reserve-based payment in 2024, with a 1.5% net smelter royalty attached to this mineral component. For Arnett, outstanding acquisition payments to earn a 100% interest in the site total US$1 million as of May. For more information, visit www.Revival-Gold.com.