BRITISH COLUMBIA – Skeena Resources has released drill results from the surface drill program at its Eskay Creek project in the Golden […]
By Magda Gardner April 23, 2020 At 3:39 pm 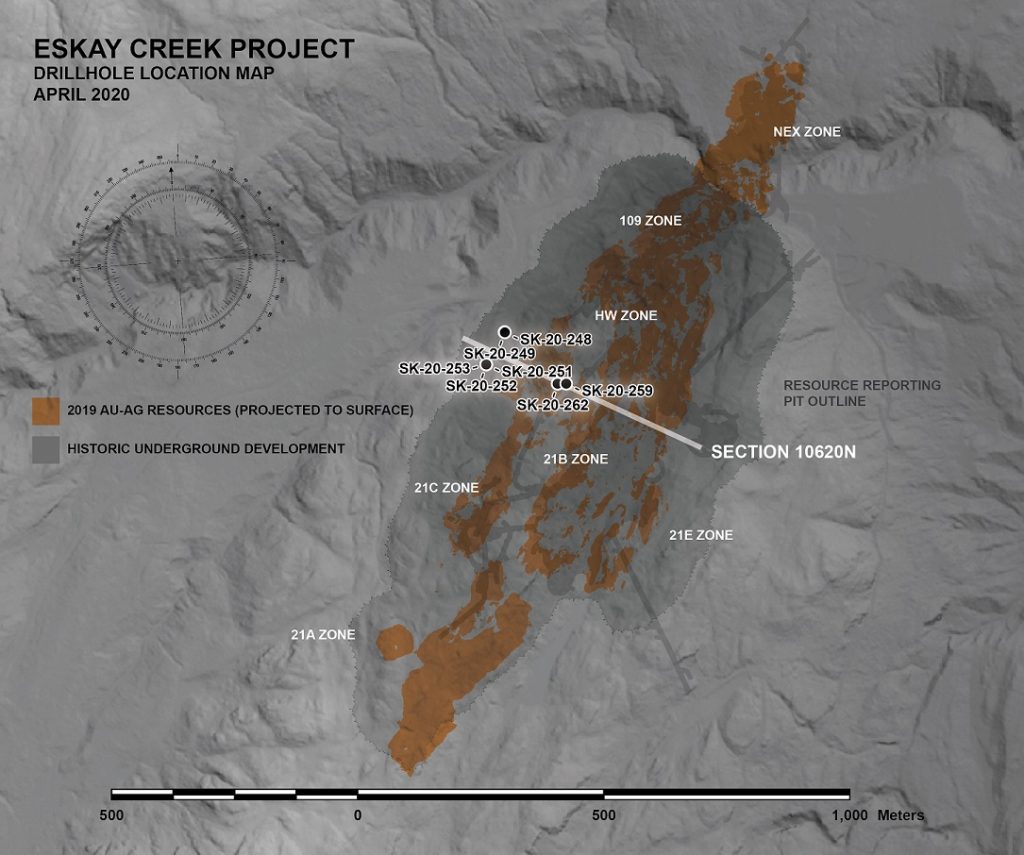 Eskay Creek drill hole plan Credit: Skeena[/caption] BRITISH COLUMBIA – Skeena Resources has released drill results from the surface drill program at its Eskay Creek project in the Golden Triangle in B.C.'s northwest. This work aims to infill existing inferred resources within the 21B and 21C zones to upgrade a portion of these to the indicated category. Drill highlights include 22.1 metres of 4.11 g/t gold-equivalent, 36.2 metres of 2.74 g/t gold-equivalent as well as 19.6 metres of 4.18 g/t gold-equivalent. Additional assays are pending. According to the company, with 4,327 metres drilled as part of the program to date, drilling continues to confirm good grade, width and spatial distribution correlation with the current resource model, which is largely based on historical drilling. The 21B and 21C zones are within the deeper portions of the proposed open pit for the site – last November, Skeena released the results of a preliminary economic assessment (PEA) for the project, which outlined a high-grade open pit operation at Eskay. Earlier this month, the company closed a $33.3-million private placement, with net proceeds intended for exploration. Last year’s PEA suggested an open pit producing precious metals concentrate sold to smelters. The mine would produce an average of 306,000 gold-equivalent oz. annually at all-in sustaining costs of US$757 per oz. The associated net present value estimate, at a 5% discount rate, came in at $638 million with a 51% internal rate of return. The proposed mine would yield diluted head grades of 3.23 g/t gold and 78 g/t silver (4.17 g/t gold-equivalent). Current resources for Eskay Creek stand at 13.5 million tonnes in the indicated category grading 6.1 g/t gold-equivalent for a total of 2.7 million oz. and an additional 13.9 million inferred tonnes at 2.9 g/t gold-equivalent for a total of 1.3 million oz. The property produced 3.3 million oz. of gold and 160 million oz. of silver between 1994 and 2008. Skeena also holds the exploration-stage, past-producing Snip gold property. For more information, visit www.SkeenaResources.com.