Talisker Resources was only listed on the Canadian Stock Exchange last April, but the junior holds more than 70% of the up-and-coming […]
By Alisha Hiyate January 15, 2020 At 2:15 pm 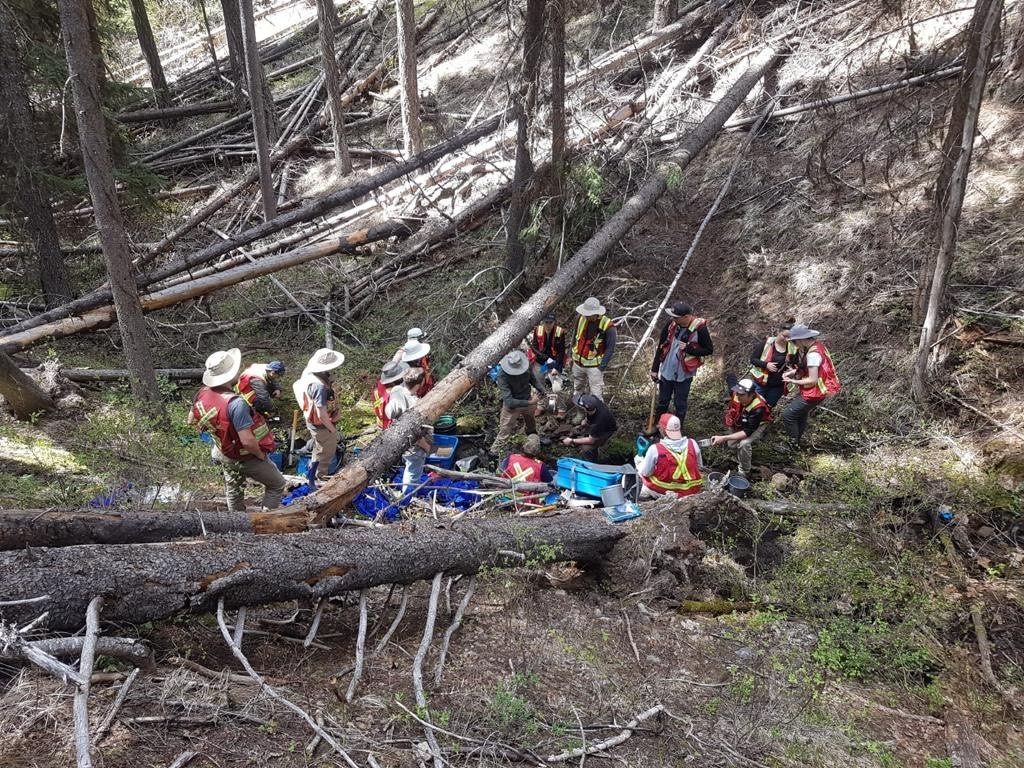 Training the crew to conduct silt sampling at Talisker Resources' Spences Bridge project last summer. Credit: Talisker Resources[/caption] Talisker Resources was only listed on the Canadian Stock Exchange last April, but the junior holds more than 70% of the up-and-coming Spences Bridge belt in southwestern B.C. Talisker is a spinout of South America-focused explorer Sable Resources, which staked the Spences Bridge belt claims in B.C. in just one day in September 2018. Matt Filgate, a senior geologist with the company staked 122 claim blocks online with the help of another Sable geo in September. Each claim block takes about 10 minutes to outline on B.C.'s Mineral Titles Online website, then acquire, Filgate says – a task they had to repeat 122 times. “We ended up doing it at night just because there's quite a few prospectors that will watch live staking online and will try and jump on and stake in the middle of it,” Filgate says. “So we did it at 11 p.m. so there were fewer people watching. We finished at 4 in the morning.” The largest staking endeavour ever in B.C., by the end of the process, Sable had staked most of the volcanic belt. Now the 2,260-sq.-km land package is being advanced by Talisker, which shares much of the same management and directors as Sable. The Spences Bridge belt hosts Westhaven Ventures' Shovelnose discovery – a project that has returned impressive drill results including 17.7 metres of 24.5 g/t gold and 107.92 silver and 46.9 metres of 8.95 g/t gold and 65.47 g/t silver. But the belt has never been systematically explored until now. Last summer, Talisker conducted a large stream sediment sampling program across its 2,260-sq.-km Spences Bridge land package. Over a four-month period, the company collected about 80% of 4,000 samples planned with a team of 22 geologists. Talisker's land package looks like a sliver, running 300 km northwest to southeast, and is widest in the middle at around 100 km, thinning at either end. Traversing the large area was made easier by the fact that the property, in south-central B.C., is accessible by road and only a few hours' drive from Vancouver. So far, 100 anomalies have been identified from the data, including 22 basins that sampled above 32 ppb gold (the Shovelnose discovery was based on a sample that returned 68 ppb gold). This year, a soil sampling program early in the year will be followed up by an initial drill program before the end of the summer. The company is targeting low-sulphidation epithermal systems, such as Shovelnose. While juniors have been active on smaller parcels on land in the belt, Talisker, informed by its founders' experiences with large-scale systematic greenfields exploration programs at AngloGold Ashanti, is taking a big picture view. Talisker president and CEO Terry Harbort and vice-president exploration Ruben Padilla know that systematic exploration works because both have been part of new discoveries made with such an approach, such as La Colosa and Gramalote, while working for the major. “All we're doing is exporting major company techniques to a junior,” says Filgate, who spent three years working at Barkerville Gold's gold project (now owned by Osisko Gold Royalties) in B.C.'s Golden Triangle, where Harbort was also chief geoscientist. In addition to technical chops and a rigorous exploration approach, Talisker has been proactive in engaging with First Nations from the very beginning. “Community support is a big thing for us,” Filgate says. “We want to take a different approach to junior exploration.” Advanced project Currently in the midst of a $13.1-million financing (initially planned at $10 million), Talisker will release its detailed exploration plans for 2019 when the financing closes in early February. In addition to a $3.5-million exploration program at Spences Bridge, it's also planning a work program at its recently acquired advanced, high-grade Bralone project. While the company's strategy is focused on acquiring dominant land positions in early stage gold belts, the opportunity to acquire the past producer came up unexpectedly last year. “We hadn't planned on acquiring an advanced project – Avino (Silver & Gold Mines) approached us,” Filgate says. The company was pleased with what it found in the due diligence process. “The upside potential there is very encouraging.” The Bralorne acquisition was completed in December for an upfront cash payment of $8.7 million plus 12.6 million Talisker shares and 6.3 million warrants. Another US$2.5 million is payable on commercial production. The project, 248 km northeast of Vancouver, hosts global gold resources totalling 170,000 oz. For more information, visit www.taliskerreources.com.