QUEBEC – Wallbridge Mining has released results from its Fenelon gold property, expanding the Lower Tabasco zone by 100 vertical metres with […]
By Magda Gardner December 3, 2019 At 1:17 pm 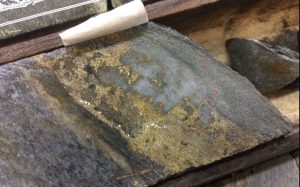 Visible gold in a core sample from the Fenelon project Credit: Wallbridge Mining Visible gold in a core sample from the Fenelon project Credit: Wallbridge Mining[/caption] QUEBEC – Wallbridge Mining has released results from its Fenelon gold property, expanding the Lower Tabasco zone by 100 vertical metres with additional intersections from the recently discovered Orion Corridor. Hole FA-19-099 intersected visible gold and sulphide mineralization at the Lower Tabasco zone over 16 metres. While assays for the intercept are pending, this drill hole extends mineralization to a depth of 850 metres. The company has also reported high grades from the Orion Corridor, a zone located 400 metres southeast of the Andromeda Corridor which increases the total strike length of mineralization to one kilometre. Intercepts from Orion include 3.79 g/t gold over 10.3 metres as well as 121 g/t gold over 0.5 metres. Additional assay results are pending. Mineralization at Fenelon has been traced over a width of 600 metres to date. Additional drilling is ongoing. The Fenelon property is located along extensions of the Sunday Lake deformation zone, host to the Detour Lake mine. In May, Wallbridge released the results of an underground bulk sample program at Fenelon: a total of 33,500 tonnes grading 18.49 g/t gold were extracted from the Main Gabbro zone. An additional 100,000 metres to 120,000 metres of drilling at the property is planned for next year. This will include work to expand and infill existing mineralization as well as to test other identified targets. Wallbridge also announced that it has closed a $42.5 million non-brokered private placement. Proceeds will be used to advance Fenelon and for corporate purposes. For more information, visit www.WallbridgeMining.com.