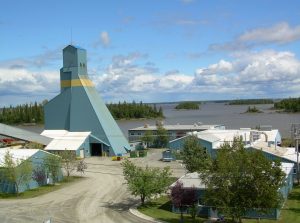 Wesdome's Kiena mine site Credit: Wesdome Gold Mines[/caption] QUEBEC – Wesdome has released results from infill and exploration work at its Kiena mine complex where both infill and exploration work returned intercepts above the current resource grades. Drill highlights from the Kiena Deep A zone include: At least two of the above intercepts appear to be from outside of the current resource boundaries. In addition, Wesdome drilled two holes for which assays are pending but based on visual observation, intersected approximately 8 metres of quartz veining and visible gold up to 50 meters down dip of the current A zone resource boundary. This zone is now estimated to span over 770 metres across the underground at Kiena. “We are extremely pleased with the recent drilling results that continue to illustrate the high grade nature and continuity of the A zone, especially as we assess the potential restart of the operation with the ongoing PEA study that is expected to be completed in H1 2020,” Duncan Middlemiss, Wesdome’s president and CEO commented in the release. In addition, the update included results from the VC zone, located above the A zone. Drill highlights include: Both these intercepts also appear to be from outside of the current resource boundaries. A drift between the VC and A zones is expected to be completed by the end of the month to allow for testing of upwards extensions of the A zone. Five drills are currently working on the site and an additional two drills have been ordered. Production at Kiena was suspended in 2013; the mine has produced a total of 1.75 million oz. and features a shaft and ramp system as well as a 2,000 t/d permitted mill. A total of $20 million was allocated this year towards underground development and backfilling. Measured and indicated resources at the Kiena complex total 2.8 million tonnes grading 8.67 g/t gold for a total of 788,100 oz. with additional inferred resources of 2.9 million tonnes at 8.51 g/t gold for 798,100 oz. The mineral zones in proximity to existing mine development (including the A and VC zones) are host to 450,400 oz. of the measured and indicated resources and grade 14.46 g/t gold; they also contribute 397,100 oz. to inferred resources at a grade of 11.02 g/t gold. For more information, visit www.Wesdome.com.