YUKON – White Gold Corp. of Toronto has completed the acquisition of certain gold exploration properties from Kinross Gold. These include the […]
By Marilyn Scales June 14, 2017 At 4:29 pm 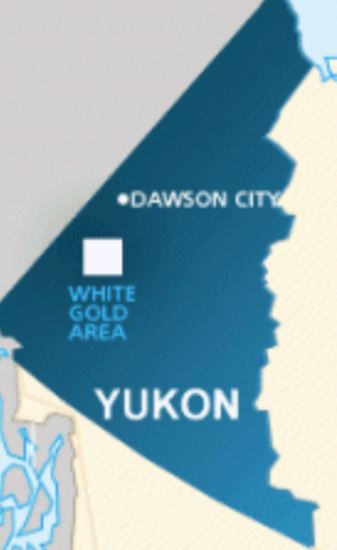 The White Gold District lies within the Tintina Gold Belt made famous during the Klondike gold rush of 1896. Credit: White Gold Corp. The White Gold District lies within the Tintina Gold Belt made famous during the Klondike gold rush of 1896. Credit: White Gold Corp.[/caption] White Gold paid $10 million in cash and issued 17.5 million common shares to Kinross. Another $15 million has been deferred, dependent on the advancement of the properties. White Gold has also completed a non-brokered private placement with Agnico Eagle Mines. White Gold issued about 4.36 million shares at a price of $2.01 per share for gross proceeds of nearly $8.76 million. The net proceeds were used as part of the cash payment to acquire the former Kinross properties. Agnico and Kinross each now hold about 19.9% of White Gold. White Gold has consolidated its holdings, adding roughly 1.0 million oz. of gold with its latest acquisitions based on historic resource estimates of the former Kinross properties. More information about the newly acquired properties can be found in the news release of May 18, 2017, available at www.WhiteGoldCorp.ca.