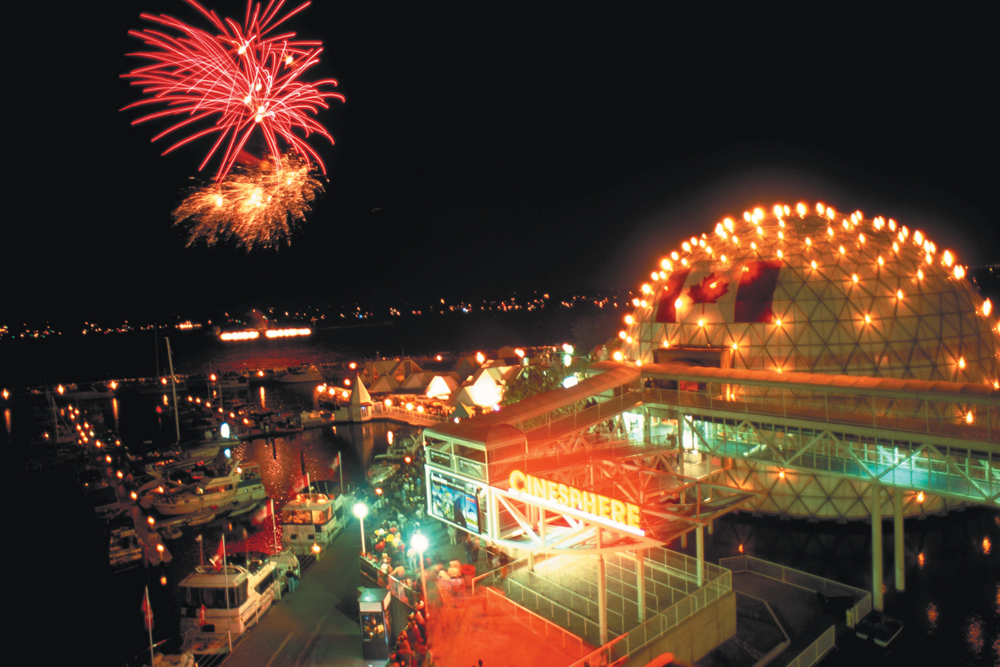 Fireworks at the soon-to-be overhauled Ontario Place. The author argues this is the perfect opportunity for the mining sector to step in and educate the public and media about the industry’s contribution to the province and the country. (Photo: Ontario Place Corporation)

Ontario Place, the provincial government's Toronto lakeshore tourist attraction has put out a formal request for innovative ideas from the private sector to help overhaul the 39-year old park. (www.OntarioPlace.com/en/rfi/index.html)

"There is significant social, cultural, and economic value in revitalizing Ontario Place," states a provincial government news release. "It also presents opportunities to explore projects related to education, culture and the arts, recreational activities and green energy initiatives to showcase all that Ontario has to offer."

Ontario Place opened in May 1971 and featured a five-pod pavilion complex, an open air forum, pedal boats, a marina, restaurants and the world's first permanent IMAX theatre, the Cinesphere. During the 1970s, Ontario Place routinely drew roughly 2.5 million visitors a year. In 2009, only about 1.0 million visited the facility.

I remember visiting in the 1980s when there was a popular pavilion that showcased northern Ontario. It was a great opportunity to educate urbanites about the North's resource industries and their enormous contributions to the provincial economy and in our daily lives. That part of the park was unfortunately closed down many years ago.

However, this recent request is a great opportunity for the entire country's mining sector to step up to the plate and build a world-class, interactive museum/science centre that showcases the relationship between mankind and the metals and mining sector, from the stone-age to the BlackBerry digitized present and future.

This new mining tourism centre needs to highlight the green, high-tech mining technologies that we currently use to sustainably develop orebodies and restore sites and the enormous economic impacts for both urban areas and Aboriginal communities.

However, it also has to be fun!

When I was growing up in the 1960s, I was a fanatic comic book "geek." Iron Man, the X-Men and the Metal Men were among my most favourite comics. The first two have already been made into Hollywood movies and are now part of global pop culture.

Iron Man's metal armour outfit - which required high-tech research and the X-Men's Wolverine character and his metallic claws that were bonded to his skeletal structure are both great teaching tools about the essential uses of metal products.

The less well-known Metal Men were a group of metallic super heroes - Platinum (the only woman), Gold, Iron, Lead, Mercury, and Tin - led by human scientist Doctor Magnus - who fought a variety of villains using the unique properties of the metals they were made out of. I was always disappointed that they did not have a Nickel character! Platinum had a "romantic thing" for Doc Magnus that always added complications to the plot.

Not only did my voracious comic book reading help me become a much better and more creative writer, it also educated me about the enormous importance and contributions that metals and the Sudbury nickel mines, where my dad and neighbours worked, made to society.

There is an old mining saying, "If the product doesn't grow, swim or walk on four legs (food sources), it has to be dug or pumped (metal, oil and gas) out of the ground.

The proposed mining museum/science centre would link these and other metallic pop cultural icons to the essential role metals and materials play in our modern society. That is the biggest problem the mining sector faces today. Urbanized populations around the world have forgotten the link between the cars, jet planes, condo buildings, computers, iPods and all the other essential infrastructures like electricity, water and wastewater systems that we take for granted. They all use a wide variety of essential minerals that need to be dug out of the ground.

There is no doubt Canada's mining sector is losing its social licence to operate in this country as well as around the world. Bill C-300, which would negatively impact the entire industry, is not yet dead and a prime example of how the industry has collectively and spectacularly failed in educating the general public and media about modern mining practises and the enormous wealth creation that accompanies mineral development. Large areas of northern Canada would still be uninhabited if it was not for the mining sector, and the sector's vital contributions to provincial and federal budgets is often overlooked.

If enough mining sector money is raised, the building could become a stunning metallic architectural icon on par with the Sydney opera house in Australia. Surely when you combine the many mining giants like Barrick, Vale, Xstrata, Teck, Goldcorp just to name a few, along with the many mining investment firms that have made Toronto the global centre for mine financing, there is more than enough mining sector clout to fund this proposal.

The redevelopment of Ontario place is a golden opportunity to build a stunning tourist showcase that highlights the enormous global contributions that Canada's and Ontario's mining and metals sectors currently make and their vast potential for the future as China, India and other developing economies industrialize and modernize with the products we sustainably dig out of the ground.

The mining sector has until Sept. 10, 2010, to present an initial proposal.