Mexico-focused GR Silver Mining (TSXV: GRSL; US-OTC: GRSLF) is “celebrating the success of our exploration model after the culmination of many years of hard […]
By Northern Miner Staff August 25, 2022 At 9:30 am 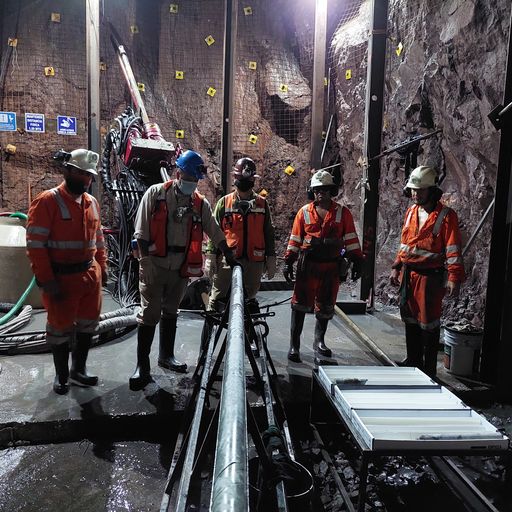 Miners work on a drill program at San Marcial, on the eastern edge of the Rosario mining district. Credit: GR Silver Mining

Mexico-focused GR Silver Mining (TSXV: GRSL; US-OTC: GRSLF) is “celebrating the success of our exploration model after the culmination of many years of hard work,” says Eric Zaunscherb, the company’s chairman and CEO.

The celebrations follow a new silver discovery in the first drill hole 250 metres to the southeast of the San Marcial resource area on its 100%-owned Plomosas project in the Rosario mining district of Sinaloa state, about 1,000 km northeast of Mexico City.

The assay results from SMS22-10 “provide proof-of-concept for the exploration potential in a new area immediately to the southeast of the existing San Marcial mineral resource,” says Zaunscherb.

“The broader Rosario mining district has been mined for over 250 years, and we have now added data from modern exploration and drilling to the trove of historical data to create a geological and exploration model focused on targeting high-grade silver mineralization and resource expansion.”

Zaunscherb says that the drill results “demonstrate the potential for significant resource expansion both near-surface and at depth at San Marcial.”

The 12.5-km2 San Marcial property is located on the eastern edge of the Rosario mining district in the Sierra Madre Occidental of Sinaloa, approximately 98 km southeast of Mazatlán and 5 km south of Plomosas.

“From an exploration perspective, there is also significant upside potential for resource expansion to depth that may be amenable to an underground mining operation,” he says.

The resource area is situated in the centre of the property and is defined by outcropping mineralization along a 500-metre long by 100-metre wide mineralized hydrothermal breccia.

“We also recognized an opportunity to increase near surface grades of the silver-rich hydrothermal breccia, which had not previously been drilled and was not included in the current resource estimate.”

Zaunscherb says that the ongoing drill program is designed to delineate near-surface high-grade zones of silver mineralization and the lateral continuation of mineralization along the prospective contact between the upper andesitic “block and ash unit” and lower volcano-sedimentary units. It is this contact, he says, that hosts the mineralization at San Marcial.

The drilling, he adds, is testing extensions of the mineralization along the target contact zone, where previous exploration had confirmed the geological contact along a 1.5-km mineralized trend, and geochemical sampling had identified several silver mineralization targets. “The recent discovery by SMS22-10 suggests that we are on the right track.”

According to Fonseca, the initial drilling success led GR Silver to extend the drilling down-dip in the resource area and further to the southeast of the southern limit of the current resource area, delineating a large, silver-rich epithermal system for the first time in the Rosario mining district’s history.

“The additional drilling will continue to target new discoveries along strike following the well mineralized contact zone between upper and lower volcanics, which hosts high-grade silver breccias and related silver-gold mineralization, and is open along strike towards the recently discovered southeast zone,” he says.

The drill results “will help with further modelling of the structural controls of the high-grade and wide mineralization in the sizeable hydrothermal zones at San Marcial,” explains Fonseca, and will be incorporated into a “significantly updated resource, which is slated for release in the first quarter of 2023.”

Following the successful completion of a $7.3 million private placement offering in March, the company “is well-positioned to advance exploration of Plomosas,” says Zaunscherb.

Significant shareholders in GR Silver include First Majestic Silver (TSX: FR; NYSE: AG), which holds an 11% interest in the company. Management and insiders own a 7.2% stake, while institutional ownership is 25%.

The preceding Joint Venture Article is PROMOTED CONTENT sponsored by GR SILVER MINING and produced in co-operation with The Northern Miner. Visit www.grsilvermining.com for more information.