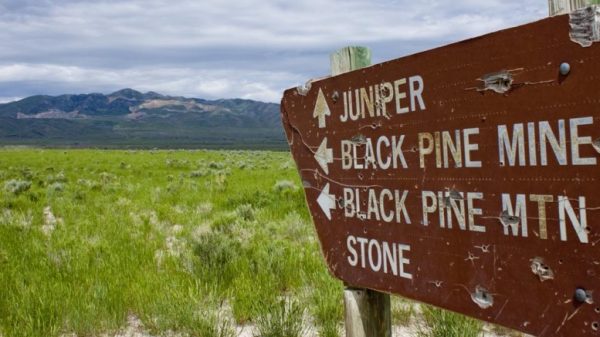 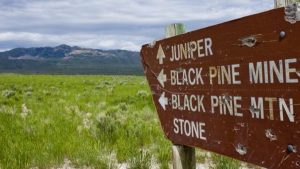 Sign pointing to Black Pine project Credit: Northern Miner staff[/caption] Liberty Gold has released reverse-circulation (RC) drill results for nine holes testing the D3 and D1 targets at the company’s Black Pine gold project in southern Idaho. Both zones returned high-grade intervals of oxide gold, with additional infill and stepout work planned. Drill highlights from the D3 zone, discovered in June, include 7.6 metres of 1.99 g/t gold starting at 260.6 metres; 33.5 metres of 0.82 g/t gold from 199.6 metres; and 80.8 metres of 0.98 g/t gold from 233.2 metres. Based on the release, most of the eight holes drilled into this zone returned multiple intervals of gold mineralization, from surface down to over 300 metres. Cyanide-soluble assays for the zone suggest highly oxidized gold mineralization. D3 is interpreted as a siltstone horizon, directly under the unit host to the D1 and D2 zones at Black Pine. Two drills are working at D3, to both infill and step-out this area. At the southeast extension of the D1 zone, one drillhole tested a 400-metre gap in drilling between two historic pits and returned 32 metres of 1.06 g/t gold from 141.7 metres and 6.1 metres of 0.8 g/t gold starting at 211.8 metres. Cyanide-soluble assays also suggest oxidized gold mineralization at this zone. The D1 and D3 zones lie within a 7.3-sq.-km permit area within the 49-sq.-km site; the permit hosts nine known oxide gold targets. Liberty has tested five of these thus far in 2020 – additional assays are pending. “With three RC and one core drill currently operating, we are on track to meet our goal of giving the identified gold system a comprehensive test in 2020, while building resource ounces at the same time,” Cal Everett, Liberty Gold’s president and CEO, said in a release. Everett added that a portion of the core program includes metallurgical work, in addition to target testing. Reverse-circulation rigs are also active within the greater permit area – assays are pending for the Southwest Extension area, southwest of the historic CD pit, and for the D1 Northwest Extension zone, north of the D1 zone. The former includes a 1-sq.-km gold-in-soil anomaly and the latter features areas of anomalous gold in surface soil samples. Drilling is expected to start shortly on the M zone target, southeast of the historic A pit, as well as on the Rangefront target, 2 km southeast of the past-producing Tallman pit. Liberty is also looking to expand the permit area by 4.6 sq. km. Black Pine is a Carlin-style gold system in the northern Great Basin. The past-producing operation generated 435,000 gold oz. between 1991 and 1998 at a head grade of 0.7 g/t gold from seven pits. Anomalous gold mineralization in soils has been traced at the 49-sq.-km site over 12 sq. km. For more information, visit www.LibertyGold.ca.