Maritime Resources reports high grades of up to 150.38 g/t gold from regional drilling at Green Bay

New results have been provided by Maritime Resources (TSXV: MAE) from recent drilling at the Green Bay exploration project in the Baie […]
By Jackson Chen March 16, 2022 At 2:39 pm 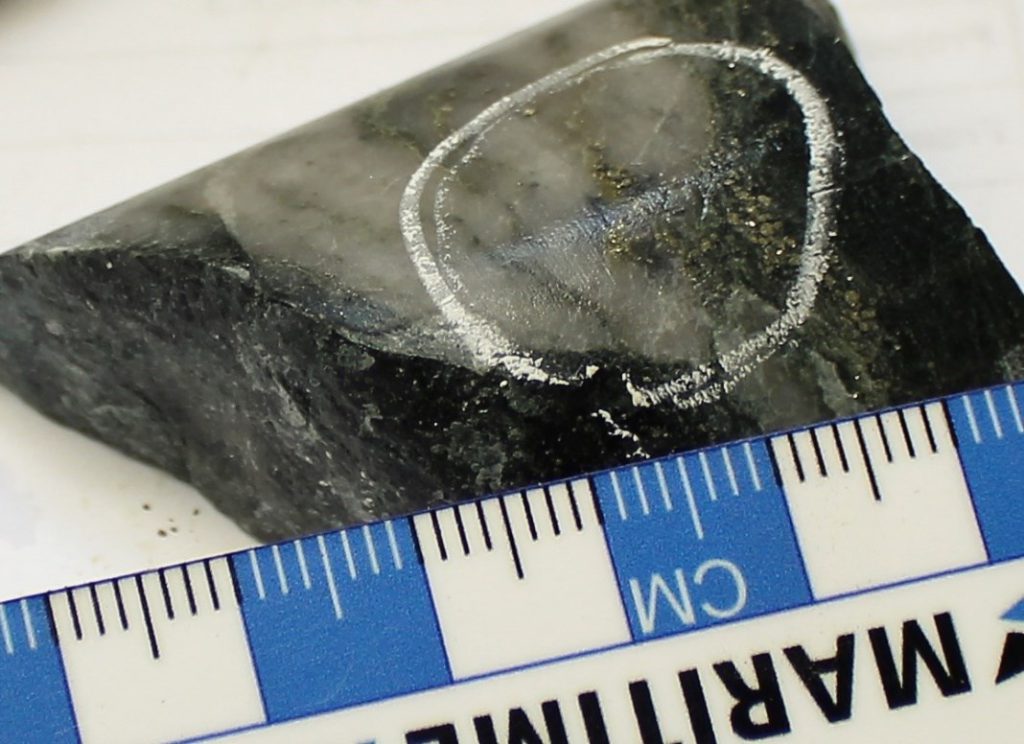 New results have been provided by Maritime Resources (TSXV: MAE) from recent drilling at the Green Bay exploration project in the Baie Verte mining district of Newfoundland and Labrador. The program is focused on targets near the former Hammerdown mine, one of four gold deposits identified on the property.

Various drill holes from late 2021 that were designed to test the depth extension of the Orion Main zone intersected significant gold assays, highlighted by BB-21-183, which returend 14.16 g/t gold over 0.65 metre, including 45.37 g/t gold over 0.20 metre. This intersection was drilled at the northern end of Orion Main zone, where the mineralization is now extended to surface.

Included in this year's program was the Beetle Pond gold zone, located 1 km east of the Hammerdown deposit and interpreted as being an extension of the Golden Anchor prospect. The first hole of the 2022 program encountered a quartz-sulphide vein with abundant visible gold. Samples of the mineralized interval returned grades of 150.37 g/t gold over 0.20 metre in drill hole GA-22-46. Additional drilling is now being planned to test extensions of the mineralized veins system between the Golden Anchor and Beetle Pond prospects.

Phase 1 exploratory drilling was also completed at the Timber Pond gold-silver-copper zone, located 8 km east of Hammerdown. Five holes totaling 647 metres confirmed the historical massive and disseminated sulphide mineralization as well as a lens of gold mineralization in the hanging wall of the massive sulphides. Two of the holes encountered significant gold mineralization, with hole TP-21-05 returning 2.33 g/t gold over 4.0 metres, including 6.08 g/t gold over 1.5 metres, and hole TP-21-03 encountering high-grade silver consisting of 0.73 g/t gold and 339.7 g/t silver over 2.0 metres, including 1.12 g/t gold and 659.0 g/t silver over 1.0 metre. A new interpretation of both historical and 2021 drilling is being completed to plan future work to test the potential extension along strike and downdip.

"This is the first drill program that Maritime has completed on the east side of the Hammerdown fold system, testing the mineral potential a distance of up to 8 km from the main deposit. The mineralization encountered at Beetle Pond and Timber Pond are a result of follow-up to historical work in the area, while the Birchy Island Pond is a new discovery made through systematic soil sampling and geophysical programs along with diamond drilling," president and CEO Garett Macdonald commented.

Maritime is currently completing a feasibility study for the Hammerdown project, with resource modelling, mine and process plant designs, and site planning for key infrastructure and water management facilities all in progress. The study is expected to be completed in the second quarter of 2022.

Several key de-risking steps have been accomplished in the last 12 months to advance the project including additional infill drilling, environmental and technical programs, plus the acquisition of the gold circuit at the Nugget Pond metallurgical facility. The Hammerdown project has been released from environmental assessment and an early works site clearing program was completed late last year.

Lac Pelletier is an advanced exploration project located 1.5 km north of the Cadillac Larder Lake Fault, adjacent to the historic Stadacona mine and 8 km east of Yamana's Wasamac gold project, in the heart of the Abitibi Greenstone Belt. The project benefits from its proximity to infrastructure, extensive surface and underground diamond drilling and over 3,000 metres of existing underground development.

More details on Maritime's properties can be found at www.maritimeresourcescorp.com.