The global leader in bulk handling Martin Engineering helped a U.S. base metal mine experiencing clogging and downtime improve material flow with […]
By Canadian Mining Journal Staff August 29, 2022 At 3:31 pm 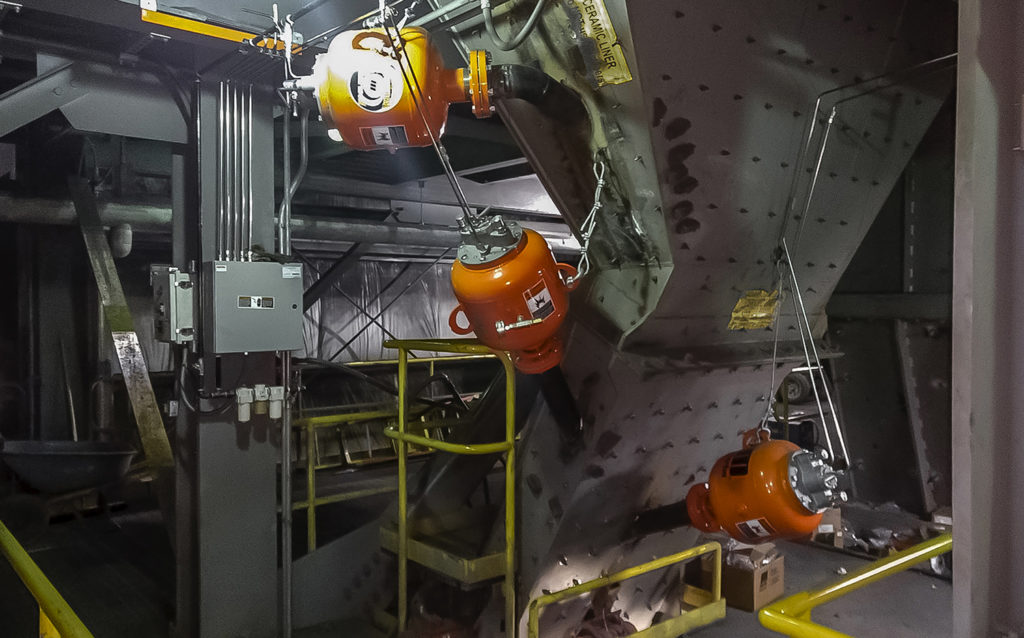 Martin installed the cannons in a chute carrying damp fines through the refining process at Lundin Mining’s Eagle nickel-copper mine in Michigan’s Upper Peninsula. The air cannons mitigated blockages and facilitated the movement of material. The result was improved safety, reduced labour, greater production, less downtime, and a calculated 10-fold savings to the cost of operation over existing solutions.

Eagle is the only primary nickel mine in the United States, mining 2,000 t/d using a bench-and-fill stoping method. The Humboldt mill, a former iron ore plant, has three-stage crushing that reduces the material to –7 mm followed by a single stage ball mill. This is followed by selective[TE1]  flotation.

Fines are screened out, falling into a wide-mouthed hopper, leading to a chute that narrows to approximately 2.5 metres wide by 0.6 metre high and, after a dead drop of several feet, slopes abruptly to about 45°. This slope slowed the descent of the fine material for a low impact and centered discharge onto a conveyor belt leading to the ore bins. Material buildup began at the hopper and at the discharge slope, but could also occur at virtually any point, blocking the chute.

Accumulation would stop the entire crushing process three or four times per shift for as long as an hour, blocking input of material all the way back to the ore storage area. Workers attacked the clog with 4.5-metre air lances from the top of the hopper and bottom of the chute. The method used a tremendous amount of compressed air and diverted manpower from other essential duties. Moreover, air lances caused excessive splash-back of wet material, which was extremely messy and potentially hazardous.

Lundin first installed a polymer lining in the chute, but it was not an effective solution. The company next installed pneumatic vibrators on the hopper wall, but the previously installed polymer lining limited the force to only the impact zone and not much farther.

Lead reliability technician Ted Lakomowski, who had worked with Martin before, suggested installing five 35-liter Martin Hurricane air cannons, followed by two more placed in essential spots in the chute. One unit was placed at the area where material discharged into the hopper, two others were positioned at the hopper slope where the most accumulation was observed, and two more were placed along the drop chute. All the tanks were accompanied by a 100-mm pipe assembly ending in fan jet nozzles.

Offering more force output than designs double their size with considerably less air consumption, the compact air cannon tanks measure only 405 mm in diameter 635 mm long, weighing 35 kg each. The units fire a shot of air at up to 8.27 bar through a fan jet nozzle, which spreads the air stream 305304 mm at the exit point, distributing the blast pattern across the surface of the wall.

Operating on a regular firing schedule of one to10 minutes – readjusted for production volume, time of year and moisture level – revealed the seven-cannon configuration reduced clogging issues and downtime. This significantly lowered the risk to operators and reduced the cost of operation.

The project also improved safety, as workers spent less time diverted from other assignments to use air lances or create vibration by beating on the hopper walls. A single technician can perform maintenance on wear parts from the outside of the cannon without tank removal, and no heavy lifting is involved.