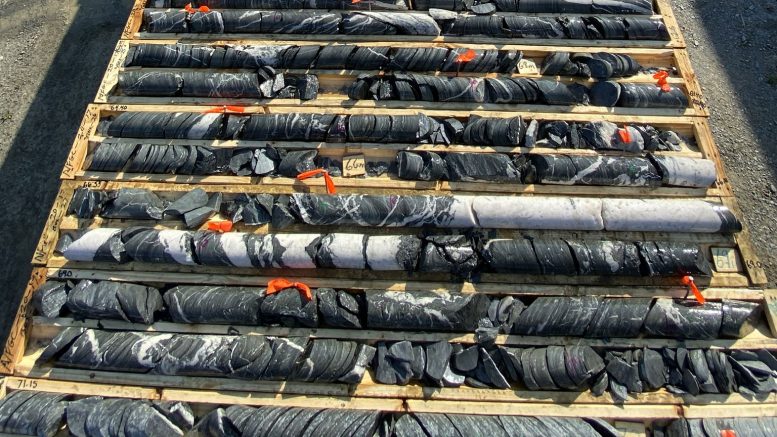 “Veining in drilling to date at the Keats Zone is characterized by quartz and sulphide mineralization displaying consistent broad thicknesses in the range of 10 metres to 40 metres,” Greg Matheson, New Found Gold’s COO, said in a release. “Good continuity is evident between holes with approximately 100 metres of strike now confirmed on this exciting high-grade zone. The zone remains open along strike and to depth, with geophysics, surface sampling, and wide-spaced drilling indicating at least 300 metres of prospective strike.”

Matheson added that the company plans to increase its drill count to eight drills, up from four, early this year to ramp-up the drilling at Keats and to test other targets along a 5-km section of the Appleton fault zone and along 3 km of the JBP fault zone.

Initial drilling along the Little Powerline zone, on the west side of the Appleton fault and 1 km northwest of the Keats zone, returned 17.2 metres of 1.28 g/t gold from 21.3 metres and 9.6 metres of 2.61 g/t gold starting at 16.9 metres. In addition, one hole also hit 2 metres of 253.8 g/t silver from 11 metres and 1 metres of 94.9 g/t silver starting at 57 metres – these are the first high-grade silver intervals from Queensway with the silver mineralization identified next to the gold-bearing structures. Additional geological work is planned to follow up on the silver intercepts.

New Found Gold wholly owns the 1,500-sq.-km Queensway property, 15 km west of Gander. This project includes over 105 km of strike along the Appleton and JBP fault zones. The company is completing a 200,000-metre drill program at the project.